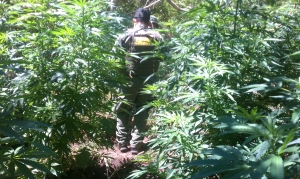 RE: Marijuana Eradication in the Inyo National Forest

The eradication took place on Wednesday August 15th and Thursday August 16th 2012.  Over two days, with the assistance of two helicopters and one fixed wing aircraft, law 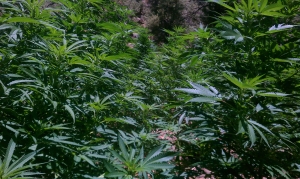 enforcement eradicated approximately 30,000 marijuana plants from a large grow site, which was approximately 1 ½ miles in length, with a potential street value of approximately $108 million dollars.

During the eradication, two suspects were taken into custody within the grow site.  The suspects were identified as Edilio Navarro age 34 of Lake Elsinore Ca. and Nemessis Venegas age 22 of Perris Ca.  During the arrest five handguns and one rifle were also seized.  There are still several outstanding suspects, who are believed to be armed.  The suspects arrested have been booked in the Mono County Jail with bail set at $50,000 each, and they could be ultimately charged in Federal Court.

With these types of illegal marijuana grow sites, public lands are routinely desecrated with garbage, piping material, etc. The U.S. Forest Service will return to the affected area and complete an extensive cleanup and restoration operation due to the destruction of public lands by these cultivators.  The cleanup and restoration is not only time consuming, but labor intensive and is done at a high cost to the taxpayers.

MONET agents would like to warn outdoor enthusiasts of the dangers of locating one of these grow sites. If you see anything that looks out of place such as cleared areas of forest that should not be cleared, fertilizer bags, black plastic pipes, large camps that seem out of place, or actively growing marijuana plants, please immediately leave the area and note the location, if possible, and notify the appropriate law enforcement agency. These large scale marijuana cultivators are routinely armed and are known to protect the gardens in any way they can.

If your against legalization you support the Mexican Cartel, weather you smoke pot or not.

Prohibition ever works and never has……ending prohibitions aways stifles or does away with black markets associated with said prohibition. Two fact that cannot be refuted regarding prohibitions without just flat out lying. As others have stated in comments above, legalize pot and this problem goes away. Allow people to grow… Read more »

Id rather control the mostly ILLEGALS that man these camps…If pot was legal, there would still be people growing higher grade than what Uncle Sam would provide. Id seriously doubt that the cartels would cease because of a US law.. Last time I checked moonshine is still illegal and alcohol… Read more »

MJA “pot sucks” if that is all you have to say and that is your only argument to a issue, I would ask somebody like you to get out of the way for the people that have a more informative stance. You know what else sucks? A speed limit that… Read more »

2 yrs ago i was doing a photo assignment for the county and I went out to the crooked meadow area. As I was shooting pics i kept noticing trucks going toward the backside of Bald Mt on a certain road to a spring area. One of my assignments was… Read more »

esfotoguy- I’m sure that experience was scary, but I have to ask you if you think that would have happen if it was legal?

I think trouble, it might still happen .. because even .. if it was legalized .. the people who would grow it .. would still do thins like that .. might not be because it is illegal to grow .. but because as with anything else, the govt. will to… Read more »

They can’t just legalize it and let it be .. they will have to regulate it to get their cut, with every regulation the Govt. will get some coin out of it. Cha ching!

I heard the cops have been eating a lot of brownies lately.

I see my jokes get real negative responses from many, but the truth is that the war on drugs is a complete waste of our time and money. Ever since Reagan declared war on drugs more of our youth have died or been put in prison than ever. Now, more… Read more »

Actually the “official” start of the war on drugs was under Nixon a great report just came out on this matter and how the US Taxpayers have spent $5 Trillion over 50 years and the arrests continue upwards, use is upwards, and there’s been no reduction, obviously a failed experiment… Read more »

it made me laugh Trouble .. I totally hear ya .. I smoked it years ago .. until had to quit .. I have mixed emotions and opinions on it. I do know .. speaking in regard to recreation, it is not so bad as a lot of people portray… Read more »

YOU may not be able to drive on cannabis but for some it should be prescribed so they chill the f out.

LOL .. the pension thing had to get thrown in there .. figures. But you’re right on the rest of that .. if we legalized it what would we do with half of the INET MONET people? drug enforcement is a big business now days, probably one of the fastest… Read more »

Mexican cartel grow sites are exactly what we don’t want in our country and why legalization of home grown for personal use is a good thing….the mexican cartels are making millions (billions maybe?) and none of that money is hitting the american economy! Get em out a here and the… Read more »

Well said sierraGrl I fully agree. There is alot of common sense tied to legalizing pot but when somebody only see’s the bad in something and has never been personnally efected by the benefits of pot (Cancer patients, PTSD, Depression, etc.). So what I am saying is your typical conservative… Read more »

more proof that the only route to stop the illegal grow operations on public land is to legalize marijuana, God wanted it this way that’s why he said, “Behold, I have given you every plant bearing seed, which is upon the face of all the earth, and every tree, which… Read more »

ESL, Yes such wonderful logic! Try eating some Jimson weed seeds and see how that sets with you, or toast some marshmallows with oleander sticks, and then follow it up with some amanita mushrooms.
Actually, that might solve some of our overpopulation troubles! Go Jesus!

JeanGenie- actually Jimson Weed is a highly potent hallucinogen and I have utilized this “God” given plant for this exact purpose- fabulous!
Our Native American brothers in the south west showed me how. God is wonderful!

Dear ESL, Before you spout off about the hallucinogenic properties of Jimson weed, or maybe at the same time, you should point out that it is also extremely toxic and can kill or injure one if used improperly. I’m sure you wouldn’t want to be responsible for anyone getting hurt… Read more »

But in the case of marijuana, it’s completely non-toxic. No one has ever died from died from ingesting any amount of this plant, ever.

Wilfred S….There is a girl in town that had to be taken to the ER because of ingesting weed…She didn’t die,but got very sick,probably because of what some creep put in it hoping to get her real high and happy and,well,you can guess what else he was wanting once she… Read more »

Actually, JeanGenie; you were the one spouting off about the hallucinogenic properties of jimson weed by saying the following, “Try eating some Jimson weed seeds and see how that sets with you, or toast some marshmallows with oleander sticks, and then follow it up with some amanita mushrooms.” I only… Read more »

ESL, I see you read but do not comprehend, or read your own thoughts into other’s statements. You are the one who initially mentioned Jimson weed’s hallucinogenic properties, not me. I mentioned it as a toxic plant, which it is. I sure hope that some kid doesn’t go out and… Read more »

LOL Local then why do a lot of Christians consider it a sin … to smoke pot .. the same as getting drunk .. just an observation. Who knows what Jesus would do … He might fire up .. He might not. I don’t think God really cares either way.… Read more »

thats quite a haul, over 100 million street value, thats 3,600$ per plant. in the picture they look kinda small, maybe the big ones were up the hill. whats the benifit for over estimating the crop. a few years back some of the creeks between olancha and indepedence had big… Read more »

“whats the benifit for over estimating the crop?”

Law enforcement’s budget is directly tied to these projections. It’s that simple.

Drug enforcement in this country has become its own cartel. It’s all become a vicious cycle, revolving around greed.

When someone steals my pot plants and I catch them, I will have the Sheriff arrest them for grand theft using the same over estimatation of my crops worth.

There’s so much pot out there those estimates aren’t even close to being correct. Pots basically free among those who legally grow it. Best way to get varity is by trading your buddy a 1/4lb of cush for a 1/4lb of purple haze. I’m totally against illegal grows in our… Read more »

If you come across one of these grow sights, you better put one in the chamber. Stay safe out there.

Yes these people would kill you if you stumbled into it. it has happened before .. some even booby trap the perimeter, and have look outs. it’s not a walk in the park. I remember as a kid going to my grandfather’s cabin for the summer in northern California (Mendocino… Read more »

Trouble,
I think your right. They could bail out the town and then some! its a win win situation.

Gona take more than that to bail out the “town”

So where was it?

Why not use the county jail inmates, both Inyo & Mono, to do the “labor intensive” work? And also, what about the Conservation Camp? It makes NO sense at all to pay anyone to clean up this mess when the county has all those convicts (misdemeanor only) just sitting on… Read more »

Perhaps because forced slave-labor is widely frowned upon in modern, civilized countries. Prison slavery is a slippery slope down a path to corruption. A simpler solution would be legalizing pot, but that would mean less taxpayer dollars being funneled to law enforcement and the prison system, which currently makes up… Read more »

Great Idea Big Rick, Have a bunch of criminals cut down illegal marijuana. I am sure they would not stash any.

Reality…read the article. The pot is ALREADY GONE. The labor intrusive work is cleaning up all the water piping, fertilizer bags, and other trash. GEEZ!

Yes Big Rick .. I agree .. when they catch these guys like this .. put them on a chain gang and other select prisoners and take them out to do clean up and restoration on these sites. In fact .. prison labor could do a lot of good in… Read more »

Maybe the cops should apply to open their own wellness center with their new found stash.

Why so negative people? I bet that 7.25% sales tax on 108 million would pay for your schools next year.