Manzanar Committee Stands with Indigenous Leaders and Other Concerned

LOS ANGELES — On March 29, the Manzanar Committee announced that it has joined the Paiute Shoshone, Timbisha Shoshone, and the Friends of the Inyo in opposing exploratory drilling and the proposed construction of an open-pit, cyanide heap leach mine at Conglomerate Mesa in Inyo County.

The Manzanar Committee’s mission leads us to oppose any project or corporate effort to exploit the land and resources of Payahuunadü (Owens Valley). We stand with the indigenous people of the area, as well as others in Inyo County, and call for their rights to be respected. They alone should determine the fate of the land and resources of the area. 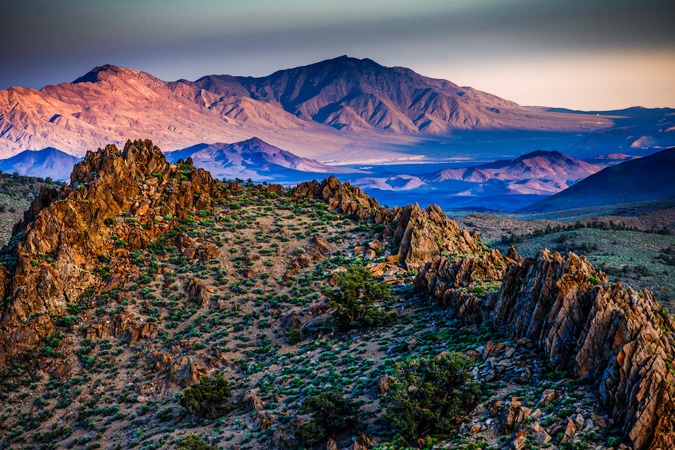 A view at Conglomerate Mesa. Photo by Ken Etzel courtesy of the Friends of the Inyo

“Our people have returned to Manzanar, which is located near the proposed mine, on an annual Pilgrimage since 1946 to honor our families,” said Manzanar Committee Co-Chair Bruce Embrey. We demand our story be respected and that rights of the original people of the land, the Paiute Shoshone, be respected; We are opposed to mineral exploration and mining at Conglomerate Mesa by K2 Gold and Mojave Precious Metals.”

“Furthermore, it became abundantly clear during the K2 Gold and Mojave Precious Metals Town Hall meeting that this corporation had only vague and specious arguments about how the exploration would proceed, and only vague promises about the supposed economic benefits,” added Embrey. “We found the presentation’s premise that our laws and environmental regulations guarantee the project would be safe and minimally invasive hardly reassuring. The long history of mining and fossil fuel companies destroying communities, contaminating land and water, all while making false promises of economic benefits, is well-known. We found the argument that mining and exploration should occur here in California, rather than in other parts of world, to be nothing more than a veiled appeal to chauvinism and xenophobia. An ironic pitch, given that it is the mining companies like DeBeers, Rio Tinto or Anglo American that have left a wide path of environmental destruction in Africa, Latin America and Asia.”

“We stand with the indigenous tribes and local communities protesting against the destruction of Conglomerate Mesa. We look forward to participating and engaging in public comment opportunities and working with our Congressional representatives to stop this destructive project on the ancestral homelands of the Paiute Shoshone and Timbisha Shoshone, and we urge everyone to sign the petition calling for the protection of this area from the destruction that mining activity would cause.” To sign the petition, go to https://www.change.org/p/protect-conglomerate-mesa-from-destructive-gold-mining/sign.

Thank You Manzanar Committee! Much appreciated.
Also…It’s not about You, and it’s not about Me, it’s about the future generations and the landscape.
FACTS!

Thank you so much for trying to preserve what is left of the unique and fragile beauty of our Valley, after the ecological disaster of the diversion of our water to the overblown suburbia down south. No more dry toxic alkali Owens “lake”! The greed and benefit of a few… Read more »

Wow. Maybe read up on the Pleistocene in re the Great Basin