The transition in the Mammoth Lakes Police Department will start to take place next week. The new Interim Police Chief, Dan Watson, will arrive July 5th. 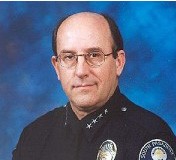 Watson, just retiring as Chief of Police in South Pasadena, will attend a farewell luncheon down there this Wednesday. He leaves his current position after eight years of service. Watson has reportedly already met more than once with Mammoth Police Chief Randy Schienle who will retire from law enforcement after a total of some 30 years of service.

Chief Schienle will work with Interim Chief Watson until Schienle leaves August 11th, according to Town officials. Town Manager Rob Clark had said earlier that Watson would serve as a kind of consultant to help the department with any internal organizational changes that might be needed.

Mammoth Police Lt. Jim Short will remain in his position, according to Town officials, until September 30th when he will retire. Interim Chief Watson will give his view of how to fill the lieutenant’s spot as well as other changes.

This transition follows some difficult times in the Mammoth Police Department, including two officers involved in a brawl at Rusty’s Bar in Bishop and the same officers involved in some type of altercation at an event in Las Vegas. The Mono Grand Jury also spent months investigating the Police Department, with some recommendations for improvement.

We work to provide daily news to all of the Eastern Sierra, in the tradition of Eastern Sierra News Service and the Sierra Wave. We bring you daily happenings, local politics, crime, government dealings and fun stuff. Please contact us.
View all posts by News Staff →
Two CHP Officers out of our area Killed on Highways
Family Raft Trip Ends in Rescue on the Walker River