Town of Mammoth officials have confirmed that they have conducted another internal investigation of Police Chief Randy Schienle. In an earlier inquiry that involved the chief and Steve Searles, officials declined to release details of the investigation. The same is true about the new investigation. Officials stated only that the chief was cleared of any wrongdoing. Some town councilmen said they knew nothing about this investigation. All of which raised questions about the Town's personnel policies and expenditure of public funds on internal matters. 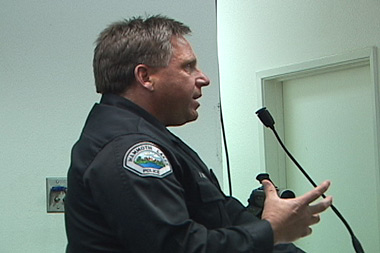 What we do know – both the mayor of Mammoth Lakes and the police chief confirmed that the town manager ordered a special firm to investigate allegations. The town received a complaint that the chief was involved indirectly in a recent domestic dispute that resulted in the arrest of a local man, although no charges have been filed.

As for any involvement in the recent domestic dispute, Chief Schienle said, "I can tell you this thing is an absolute false rumor. It's been investigated by the town and proven to be 100% false." Chief Schienle believes he has been unfairly targeted, perhaps by citizens with an agenda, for two investigations in which he says he was 100% cleared.

The alleged domestic dispute case which prompted the recent town investigation, according to District Attorney George Boothe, remains under investigation in his office. At last report no charges had been filed.

Other reports indicated that Police Chief Schienle was subpoenaed to appear before the Mono County Grand Jury, but Town Manager Rob Clark clarified that report and said the Grand Jury issued a request, not a subpoena, to the town for all records and documents relating to the employment of Steve Searles, who worked in the police department.

Manager Clark concluded that the most recent investigation involving the chief resulted from specific allegations of a violation of rules, which, again, Clark said, were "unfounded."