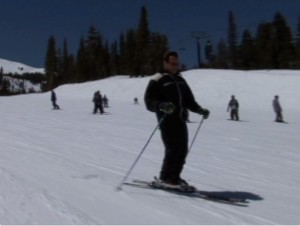 Arnold knows a great mountain when he skis one.

At Mammoth Mountain Ski Area, visits went up 10% and so did revenue this season. The good news has turned up at most of the nation’s ski resorts. MMSA CEO Rusty Gregory said that Mammoth will end up with more than 1.25 million skier visits for the season.

Gregory, who is Chairman of the National Ski Areas Association said that the association survey shows 59.7 million visits, the second best season ever according to preliminary results. The all-time record of 60.5 million visits happened in 2007-2008.

Why the major return of skiers and snowboarders? Gregory called it a very, very good return. He said we are still in a recession and suffering from lower employment but the demand is improving, Gregory said, as economic circumstances stabilized. “We may not have a dramatic improvement,” said the CEO, “but we’re stabilized.” On top of this, a very good snow year hit Mammoth. The snow arrived before Christmas and has kept on coming.

The customers at Mammoth Mountain have more money than others and were not hit so hard as the lower end of the economic spectrum, Gregory said. The other change this season – more discretionary spending. Gregory said that last year, skiers did not spend on ski school and retail. He said this type of spending has improved. Gregory said we have returned to a more normal, historic pattern.

One more detail, Mammoth’s Season Pass sales, Gregory said, were “extremely strong.” He is very pleased and focused on the company’s finances.

According to the Ski Area Association survey, all regions in the nation achieved substantial gains in total skier visits, except the Northeast.

We work to provide daily news to all of the Eastern Sierra, in the tradition of Eastern Sierra News Service and the Sierra Wave. We bring you daily happenings, local politics, crime, government dealings and fun stuff. Please contact us.
View all posts by News Staff →
More from Allen Blumer
Bishop High School Can Absorb Benton Students