Instead of the usual phrase of the 800-pound gorilla to describe Mammoth Mountain, CEO Rusty Gregory called the company and its economic position these days the "800-pound canary in the mine shaft." 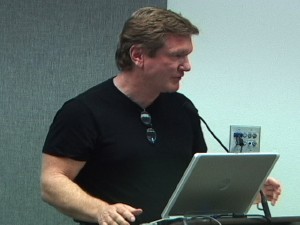 "Things are going on that have never happened before," Gregory explained to a crowded Suite Z. Gregory had come before the Town Council and the public to discuss the Mountain's business plan and how the company is, and will be, dealing with the economic downfall.

We talked to Gregory about a week ago on the lay-offs and cutbacks. By this point most locals know that the Ski Area laid off 101 employees last week, but what you probably didn't know is that, like the Town of Mammoth Lakes, the Ski Area overestimated its budgets. At this point both skier visits and revenues are down 20 percent below projections, and according to Gregory, "the recession is likely to dampen visitation through 2010."

"People are continuing to recreate, but less expensively," Gregory explained. He added that if weather and skier visits continue in this trend, the Mountain may see an early close to the season – possibly the end of March or April.

Gregory's somber message that predicted at least three years to pull out of the economic downturn, according to historical recession data, was also highlighted by hope.

"Hope is essential for success even though it is not a strategy," he explained. "We know what to focus on."

Hopeful items that Gregory pointed to included air service, the prediction of a wet February, and the fact that there are still 20 million people in Southern California that just need to get in the snow mindset.

"If Southern California gets cool, wet weather rather than the 80 degree temperatures they have been having, they will think about coming to Mammoth," Gregory said.

Gregory's predictions point to more marketing, especially to get the word out about air service, and more collaborative efforts with the Town in the upcoming months.

We work to provide daily news to all of the Eastern Sierra, in the tradition of Eastern Sierra News Service and the Sierra Wave. We bring you daily happenings, local politics, crime, government dealings and fun stuff. Please contact us.
View all posts by News Staff →
No Homebuyer Assistance Program For Inyo
A Bear Management Contract Plus a Badge