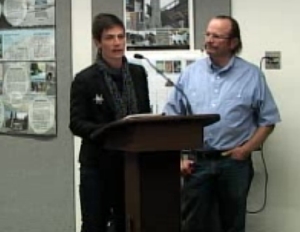 With Mammoth Lakes Housing under the gun with Town of Mammoth money problems, Housing Director Pam Hennarty has announced her resignation, effective April 12th when she goes to work as the Senior Deputy County
Administrator for the County of Inyo.

Mammoth Lakes Housing, an organization tasked with the job of finding funds and creating affordable housing in Mammoth Lakes, took big budget cuts from the Town as the government struggled with huge budget problems and payment of the huge lawsuit debt. Political support also seemed to fade somewhat.

A press release from Mammoth Lakes Housing says that Hennarty announced her resignation at the March 11th Board of Directors meeting. Hennarty joined Mammoth Lakes Housing in 2004 as a Project Manager with oversight of the construction of the non-profit’s first four workforce housing developments. The Board appointed Hennarty as Executive Director in 2007 with work to increase affordable housing in the Town of Mammoth, Mono County and the City of Bishop.

In addition to building new units, Mammoth Lakes Housing offers programs including Down Payment Assistance Loans, acquisition and rehab of existing housing along with successful completion of an additional development project. Mammoth Lakes Housing Board President, Kirk Stapp, said the Housing organization has “diversified, adapted and evolved under Pam’s direction.” Stapp called Hennarty an asset to the organization.

Sounds like Caldwell got his personnel secatary to me.

You are apparently confusing City of Bishop government with Inyo County government.
BK

Guess your right, but I got my point across about what I think of Caldwell’s administrative abilities.

The previous articles about Pam Hennarty and her being mailed out by the Town of Mammoth would make me question why Inyo County would hire her. Mono County has an asset in the hiring if Inyo County Auditor-Controller, Leslie Chapman. It looks like Mammoth and Mono County are cleaning house… Read more »

Strictly from off the top of my head, quite a few posters on this blog appear to be from Inyo County (perhaps even a majority are from Inyo). A lot of the regular posters like to slam anything or anyone that has to with Mammoth Lakes and/or Mono County. This… Read more »

You may be suffering somewhat from a bit of paranoia. The Google analytics for our website show an even split between Mammoth and Bishop.
BK

There are a lot more low cost or workforce housing units now than when I moved here 12 years ago. In fact, there’s so many that the old time units that used to have people waiting in line, now stand vacant for a lot longer. To the point that rents… Read more »