Controversy at Mammoth Hospital. A large group of employees and department heads crowded into a special hospital board meeting Tuesday. They pled with board members to consider hiring Interim CEO Ed Matthews as permanent CEO, citing his ability to restore morale at the hospital. 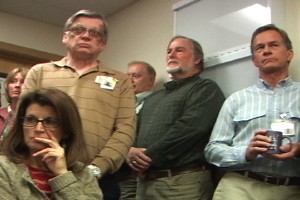 Long-time hospital administrator Gary Myers decided to call it quits at the end of the year and the Mammoth Hospital Board began the process to select a new CEO/ Administrator.

When Myers left, Finance Director Ed Matthews took over as Interim CEO. Many expected he would take over as CEO in due time. Yesterday, sources at the hospital said that the Hospital Board continued to interview candidates from out of the area in search of a new CEO but were not considering Interim CEO Matthews.

Hospital Board Chair Don Sage told the crowd that the Board had decided to narrow the field and that Matthews was not a candidate. Sage said the Board feels they need to hire someone with a depth of experience in hospital administration. Those in the audience said that Matthews has created a "sense of family that has been missing at Mammoth Hospital." One after another urged the Board to consider Matthews.

We spoke to Board Chairman Sage after the meeting. He said the Board did consider Ed Matthews but felt they needed a CEO with more experience actually running a hospital. The Board has interviewed 5 candidates, narrowed them to 3 which they will further interview in coming days.

What about the apparent morale problem among workers? Sage said they'll try ot address that.

We work to provide daily news to all of the Eastern Sierra, in the tradition of Eastern Sierra News Service and the Sierra Wave. We bring you daily happenings, local politics, crime, government dealings and fun stuff. Please contact us.
View all posts by News Staff →
State Budget Cuts Could Lead to Teacher Layoffs
The Way We Were