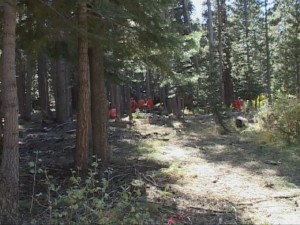 reduction of up to 30% in mutual aid in California. That means Mammoth Lakes may have to handle major fires with far less help. Chief Harper assured the Council that he and others will work hard to reduce fire fuels around town.

As for volunteer firefighters, Chief Harper said Mammoth Fire has about 50 right now. He called it the highest number in 5 years. He complimented the frontline engine company that he said knocked down a dozen structure fires and “save losses.” On the department budget, Harper said they have to take a little out of reserves every year. He said 65% of the $3 million annual budget goes for personnel.

Chief Harper named the greatest areas of danger the Lakes Basin and Old Mammoth. That’s where they are working on fuels reduction. Crews have done a lot of work in Shady Rest in the center of Town. Mammoth Fire, the Town and property owners re sharing the cost. A lot of work was done last season and more will continue soon.

Harper added the the Forest Service completed a huge project from a $400,000 grant to clean up Old Mammoth, the Bluffs and Red Fir. The work continues. Chief Harper said the department has done 1300 defensible space inspections around homes in Mammoth and will do more.

We work to provide daily news to all of the Eastern Sierra, in the tradition of Eastern Sierra News Service and the Sierra Wave. We bring you daily happenings, local politics, crime, government dealings and fun stuff. Please contact us.
View all posts by News Staff →
Court testimony points to Inyo DA’s involvement in document release
Openings delayed for Lakes Basin, Reds Meadow roads