By News Staff on August 7, 2012 in Government Agencies/Utilities 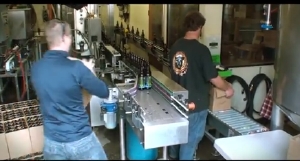 Mammoth Brewing Company is selling more beer than they can make. That happy position has led Sean and Joyce Turner, owners of the company, into a serious look at expansion. They now have an eye on Inyo County-owned land south of Jack-in-the-Box in Bishop. Joyce Turner is leading the new brewery project.

Turner is quick to say that Mammoth Brewing is not leaving Mammoth Lakes. She said, “We will maintain our presence in Mammoth with an eventual relocation from Whiskey Creek to another location in town and expand our ability to produce.” She said the expansion will most likely happen in Bishop where they would plan to “crank out kegs, bottles and cans” and distribute throughout the West. Right now the company sells to Yosemite, Tahoe-Truckee and Inyo and Mono and offers a tasting room on Berner Street in Mammoth.

Turner said she and others have searched virtually all available parcels in Inyo and Mono and think the Bishop land is the best choice. “We want to grow from a local brewery to 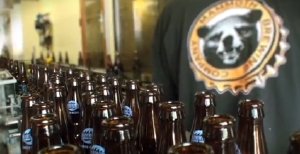 an Eastern Sierra regional brewery,” she said. Turner sees this plan to grow as only positive for Mammoth Lakes, where the brewhouse will remain, and for Bishop and for the region.

Mammoth Brewing Company has captured the spotlight in the beer industry. In San Diego in May at the World Beer Cup held by the Brewers Association, Mammoth Brewing brought home a gold medal for their Double Nut Brown Porter and a bronze for their Real McCoy Amber Ale.

Last week-end, Sean Turner said Mammoth Brewing’s participation in the 17th Annual Festival of Beers and Bluespalooza was the “biggest year so far.” With an additional fourth night in this year’s events, Thursday was a free night which created a locals reunion. “We expected about 500,” said Turner, “and more than 1,000 showed up.” With a bad snow year, layoffs, Town bankruptcy and other troubles, Mammoth locals were ready for a feel-good time.

Joyce Turner said she knows some may be worried that Mammoth Brewing will leave town. She says that’s not the case and that it’s all about expansion and a production facility.

The Inyo Supervisors had scheduled a closed session Tuesday involving Mammoth Brewing and another session with Joseph Enterprises, also interested in the Jay Street property as a possible part of the County Office Complex project. Asked if she could reveal any more details about all of that, Turner said she couldn’t. She did say it’s all in the talking stages.

Turner said, “We so want this to be a positive thing for Mammoth, Bishop and the Eastern Sierra. People need to understand that we are keeping what is best in mind for the brewery and for the community.”

Wow, a owner that cares. I’m lost for words.

Benett, do you know if The Turners looked at the former Janie’s Ranch (the brothel) property just north of Benton in Nevada? That property has its own spring on it and if I remember correctly its about 50 acres. Plus its in Nevada and I’m no tax professional but I… Read more »