Over the summer, archeological digs at the Snowcreek VII construction site touched off a controversy that spun in numerous directions. Now as the next phase of the Snowcreek development heads through the planning process, controversy over the history that lays beneath our feet may rise again.

Archeologists report that a large native village site, that was primarily occupied between 1200 BC and 1300 AD, lays in and around the Snowcreek area. 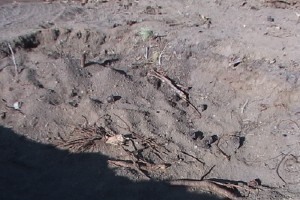 With 9 holes to be added to the golf course and numerous other buildings planned for this final phase of Snowcreek, concern over the destruction of cultural resources has returned. Mammoth resident, Dr. Nancy Peterson Walter, explained that the burial ground for the village has not been found. If and when the burial site is found, Peterson Walter says that things could become difficult and expensive for the developer.
There are rules for building around archeological sites.When the controversy over Snowcreek VII started up over the summer, the Senior Planner for the Town of Mammoth Bill Taylor, explained that the Developer Chuck Lande had followed all the rules.

When we last spoke to Lande on this subject, he stated that so far no human remains have been found. If graves were found during construction, Lande explained that there are rules that govern that situation as well, and that the rules would be followed.

In the cultural resources section of the Environmental Impact Report for Snowcreek VIII, the words “large and significant” are used to describe the site that sits under Snowcreek and may soon sit under the proposed golf course addition. If they say the site is so significant, why did they destroy half of it? Peterson Walter asks.

The public comment period for the Snowcreek VIII project remains open. Dr. Peterson Walter has submitted comments to the planning commission that point out areas that weren’t studied where the rental office is now located. With a dense site like this one, she believes that test pits should have been dug closer together. Dr. Peterson Walter also suggests having an anthropologist monitor digging on the next phase of construction.

The public comment period on the EIR for Snowcreek VIII ends on October 22. The entire document can be found on the town of Mammoth Lakes website.

We work to provide daily news to all of the Eastern Sierra, in the tradition of Eastern Sierra News Service and the Sierra Wave. We bring you daily happenings, local politics, crime, government dealings and fun stuff. Please contact us.
View all posts by News Staff →
Ferris Wheel Needs a Home
Changes Put Off for Southern Inyo Trash System