What firefighters feared came true Friday afternoon. As clouds rolled in over the Eastern
Sierra, so did lightning and then fire. Blazes broke out in the upper elevations of the Sierra
above Independence and Big Pine. 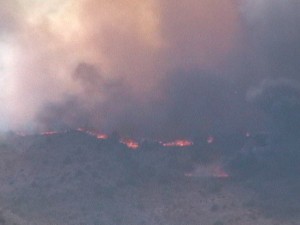 Nancy Upham, Public Affairs Officer for the Inyo National Forest,
reported that in one hour, ten fires ignited from lightning. At last
report, the biggest fires were north of Oak Creek and in the Seven
Pines cabin area both in the Independence area in the foothills of
the Sierra.

Inyo Sheriff Bill Lutze went to work in the Big Pine area where he
helped to evacuate Big Pine Canyon campgrounds. Fire burned north of
Baker Creek in the foothills. Flames could be seen along a quarter-mile
expanse of a ridge there.

We work to provide daily news to all of the Eastern Sierra, in the tradition of Eastern Sierra News Service and the Sierra Wave. We bring you daily happenings, local politics, crime, government dealings and fun stuff. Please contact us.
View all posts by News Staff →
WAMU Investigation Continues
Gravity Race Cancelled in Mammoth