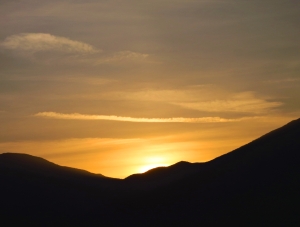 The month of September 2014 marks the 10 year anniversary of the Sierra Nevada Conservancy.  During the course of that decade, the SNC has accomplished many extraordinary projects which have greatly benefited the 22 counties that encompass the Sierra Nevada region, with the Eastern Sierra Subregion (consisting of Alpine, Mono, and Inyo counties) being a major recipient of these efforts.  As a current Board member of the SNC, I would like to highlight and celebrate some of these notable projects.

For the Sierra Nevada Region as a whole, the SNC has invested $54 million dollars in grants that have reduced fire risk, improved water quality, protected iconic landscapes, preserved working ranches, improved public access to public lands, and remediated abandoned mine lands of the past.  In addition to this basic funding, the SNC has leveraged over $68 million dollars to augment the original investments.  Upwards of $11 million dollars has been spent on over 75 projects throughout the Sierra that focus on improving forest health and reducing wildfire risk.

The SNC established the Sierra Nevada Forest and Communities Initiative to address forest health, wildfire, and local economic concerns in the Sierra Nevada.  The SNC has been a leader in researching and developing bioenergy facility projects .  The SNC established the Sierra Nevada Geotourism MapGuide Project  in partnership with the Sierra Business Council and National Geographic to promote sustainable tourism and recreation in the Region.  The SNC has celebrated 5 years of coordinating the Sierra-wide Great Sierra River Cleanup that has hosted more than 19.000 volunteers and removed over 600 tons of garbage from the waterways that provide more than 60% of California’s developed water supply.

Specifically for the Eastern Sierra Subregion (that’s us), The Sierra Nevada Conservancy has funded more that $4 million dollars on projects that have protected and restored watersheds, improved forest health, restored abandoned mine lands, and enhanced and protected agricultural lands and operations.  More than $1 million in additional funding has been created through leveraging  our efforts.  The SNC  completed a Recreational Use Plan for the Lower Owens River Project, supported an invasive weed removal effort in a popular recreation area, and did water quality monitoring and creek restoration in areas impacted by increased recreational use.

Also in the Eastern Sierra, the SNC has funded fuels reduction and wildfire risk reduction around the communities of June Lake, Mill City, and Mammoth Lakes.  These projects have protected local communities, habitat, critical water resources, and recreational assets, and we would be at much more dangerous risk without them.

The majority of our funding for all of these valuable projects came from the Prop 84 Water Bond which has now been depleted.  This fall there will be a new and very focused bond on the ballot to support not just this Conservancy, but many other critical water and conservation issues facing California.  I urge you to study the initiative and vote your conscience in November.   Sustaining and improving the social, economic, and environmental integrity of California’s Sierra Nevada Region is critically important to our future and future generations.

We work to provide daily news to all of the Eastern Sierra, in the tradition of Eastern Sierra News Service and the Sierra Wave. We bring you daily happenings, local politics, crime, government dealings and fun stuff. Please contact us.
View all posts by News Staff →
Joann Stanford remembered
June Lake resident has died