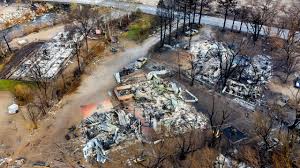 The Mountain View Fire began on November 17, 2020 in the town of Walker, Calif., and burned approximately 20,000 acres, destroyed 90 homes, and killed one homeowner.

Initial reports of the fire mentioned “downed power lines” as the cause during a strong wind event as the reason for the fire, but the cause quickly became listed as “unknown” and “under investigation.” The power lines are owned and operated by Liberty Utilities.

Lawyers have been sending letters and using other means to solicit clients. They are saying that the wind event was predicted by the National Weather Service, and other utility companies, such as Southern California Edison, de-energized circuits in the Santa Clarita Valley to prevent a fire.

The legal argument from several law firms now seeking to represent Walker clients is that Liberty Utilities did not de-energize circuits its transmission in Walker, which could have prevented this deadly fire. Furthermore, there is the additional argument that Liberty Utilities had a duty to design, inspect and maintain its overhead electrical equipment to withstand local weather conditions, such as strong winds.

This legal strategy was used by lawyers in the 2019 Pacific Gas & Electric settlement of the Paradise Valley fire, also known as the Camp fire, which started on November 8, 2018 and almost wiped out the entire town (90%).

It was reported in the Los Angeles Times on Dec. 6, 2019, that PG&E entered guilty pleas 84 felony counts of involuntary manslaughter stemming from the fire, which was blamed on the company’s crumbling electrical grid. The Camp fire killed 85 people and destroyed more than 18,000 buildings, including 14,000 homes.

PG&E announced a $13.5-billion settlement for several Northern California wildfires that killed dozens of people and destroyed thousands of homes and businesses. Other fires covered in the settlement included the Tubbs fire in 2017, the Ghost Ship fire in an Oakland warehouse in 2016 and the Butte fire in 2015.

While liability for the Mountain View fire is being placed on Liberty Utilities by lawyers, others have cited climate change which has resulted in very hot, dry weather conditions, combined with large fuel loads from dry grass and dead trees, over an extended wildfire season, as a significant factor. But then, you can’t sue the climate or the weather.