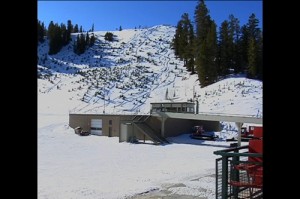 June Lake residents want to keep the heat on Mammoth Mountain and its land exchange to acquire the acreage at the Main Lodge. They say this is their only leverage to push Ski Area CEO Rusty Gregory into a commitment to re-open June Mountain with major improvements and marketing.

She added, “We want him to know why its’ a bad deal for us. It’s our leverage to get Mammoth Mountain to act on June Mountain instead of putting a band aid on it.”

Citizens want Rusty Gregory to make a commitment in writing. Suszynski said they also want him to “no longer neglect improvements that are necessary to make it a viable ski area. We also want it promoted.” Residents want to see snow-making returned to June and an improved J-1.

Gregory has publicly stated he will re-open June Mountain next season, and letters to passholders for next season say the passes are good for June Mountain. Citizens say they want a lot more than that. More discussion is expected at an April 2nd Citizens Advisory Committee meeting in June Lake and April 9th at the Mono Supervisors’ meeting.

Thank you Benett for posting some great comments on this subject. I’m sure more to come over Easter weekend. Happy Easter. sierrawave.net staff!!

ALSO…join us at the Board of Supervisors meeting in Mammoth on April 16, where we explain why MMSA shouldn’t get the Mammoth Base Land Trade because they are an exceedingly poor steward of public lands at least the ones to the north. I also wonder why anyone who owns lodging… Read more »

The letters from environmental groups are OLD STUFF. I’ve seen them. We’ve recently received several retractions which we will be making public when the time comes. Who cares how long the trade has been in the works? It still has to jump through tons of hoops and we’ll be there… Read more »

Sierra fan, I’m glad you see the light of opening the Mammoth motocross track for more public use. FYI The supercross race series all over the world this season are packing stadiums with over 60,000 fans. 80 percent of the fans are families owning some kind of motorized toy. Not… Read more »

The citizens of June Lake need to start A phone train and call the Civil Rights office in Washington D.C. I’ve called and filed complaints against Jon c Regelbrugge and Jon Kazmierski for ABUSE OF POWER. These 2 U.S.F.S district rangers for Mono County are just as much responseable helping… Read more »

I’m a news reporter. I don’t have any personal complaints about any of the above.
BK

Do you really think that Rusty doesn’t want the track open? Don’t you think with having the track operating would increase the mountain traffic? Sure, they might not receive lodging but mountain visits would go up in the summertime with the mountain biking, shops, etc. Many of the folks into… Read more »

You’re probably right that MMSA can out tough June Lake. But the land trade is bogus. The “sensitive areas” around Mono Lake is the Cunningham parcel but the part of that in the land swap is on the South side of 395. The part of the parcel that is on… Read more »

Soooo, if I understand the June Lane mentality correctly, Mammoth Mountain closed June Mountain because it could not be run at a profit. This is largely due to the fact that there are not enough beds in the community to support a viable ski area. When money was flowing many… Read more »

Once again…you are wrong. The community reelected a supervisor who TWICE ran on the platform of developing the rodeo grounds. The only factor that preventing the project from moving forward is the when the economy tanked. and the fact that the county planners would not go for the variances [building… Read more »

Sounds like you not only drank the Koolaid, but you liked it and want more!!!!! It makes no economic sense to build the beds, hoping MMSA/Starwood gets serious about running a successful ski area. I ask you, how many times in the past have the beds been fully occupied in… Read more »

Now, now Don. This blog is rapidly becoming a civil and respectful one.
Some very good information and facts have been presented.
No need for the insulting remarks “drink the Koolaid.” A thoughtful rebuttal will suffice.

Nobody really wants (or needs) this blog to resemble the Rush Limbaugh Show.

So maybe some clarification is needed…I think “drinking the Kool-Aid” refers to incorrect perceptions that get spread around and accepted as fact. We can also call them lies and falsehoods but maybe that’s too Limbaugh-ean for you. Here are several which appear in “that’s the plan?” s post. 1) Soooo,… Read more »