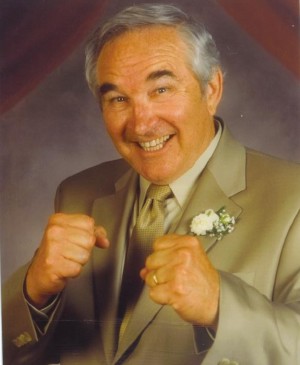 This photo of the animated Core was taken at his and Jo’s 50th wedding anniversary.

was 74. He was surrounded by family when he died at his home in Bishop after a long battle with Lou Gehrig’s disease.

When the banks wouldn’t help prospective business people in Inyo and Mono, Jim Core was there, gaining the moniker “The Secret Bank of Mammoth”. He was the founding CEO and President of the family-owned business, Inyo-Mono Title Company, located in Bishop and Mammoth from 1983 until his recent retirement.

Survivors include loving wife Jo Core of 57 years. Jim and Jo met in kindergarten in Paris, Arkansas, where Jim was born. They met up again in the early 1940s in Port Hueneme when they were juniors in high school. Relatives said their love was that of a lifetime.

Jim had a great sense of humor, and as family said, you would always find a smile on his face. He lit up any room he entered and never knew a stranger, they said. He was described as a devoted family man who loved to travel with Jo and their dog, Tibby. He liked Dollywood and The Grand Ole Opry. Jim loved golf and craps and a good game of poker.

Private services were held on July 20 at Pioneer Cemetery in Bishop. A public memorial for Jim Core will soon be announced in Mammoth. Donations can be made to Renown Hospital Institute of Neuroscience, ALS Division, Attn: Lisa Jonkey, 10101 Double R. Blvd., Reno, NV 89521 or the Hospice of the Owens Valley.

We work to provide daily news to all of the Eastern Sierra, in the tradition of Eastern Sierra News Service and the Sierra Wave. We bring you daily happenings, local politics, crime, government dealings and fun stuff. Please contact us.
View all posts by News Staff →
Bureaucrat Beat: More Secrets, Frosty Relations, and Whale Watch
Hi Country Market Reaches for Sun Power