In hard times, it helps to help each other. Inyo Sheriff Bill Lutze has pushed up an inmate crew program that means free manpower for Inyo towns.
Today, the striped uniforms of the Inyo inmates could be seen raking and cleaning up the area around the ball fields in Big Pine. Sheriff Lutze said that he has organized projects in different communities.

Lutze said inmates worked at Mt. Whitney Fish Hatchery to clean out the famous trout pond in front of the hatchery, with plans to fill it in the spring. Lutze said the sheriff’s department has always had inmate work crews but now he has put some consistency in it.

This new push for work crews comes in addition to an earlier work release program that has placed qualified inmates at places like county dumps.

Sheriff Lutze hopes to do more. He said that with the federal stimulus package, he will put in for low offender housing and a program to raise vegetables for the jail, juvenile hall and others who may want to get involved. With everyone in search of money, Lutze said, he can, at least provide free manpower. 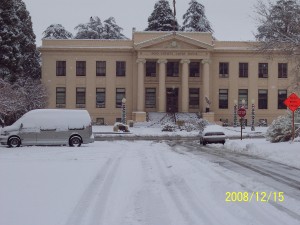 Inyo County Courthouse in the Winter

On the not so good news side of the Sheriff’s office, Lutze said that his department has taken a hit from the State Budget troubles. He’s down $800,000 with lost rural county funding, lost money for the Inyo Narcotics Team and other state funds.

Sheriff Lutze believes in the drug enforcement work by INET and says he will support it from within his budget for as long as he can. Lutze said he was able to put some money away and can supplement INET and assign a deputy to it. He said the CHP has assigned a full-time officer to INET, with fulltime people also from the District Attorney, Bishop Police and Probation with a nearly full-time person.

Sheriff Lutze, like many county officials, waits for something definite from the State.

We work to provide daily news to all of the Eastern Sierra, in the tradition of Eastern Sierra News Service and the Sierra Wave. We bring you daily happenings, local politics, crime, government dealings and fun stuff. Please contact us.
View all posts by News Staff →
Federal Charges After Bishop Airport Incident
Fort Fire Contained, but Cause Undetermined