TEMPLE CRAG / SIERRA NEVADA, CA, June 17, 2019 – On June 15 at around 5:45pm, a male and female party of two were “simul-climbing” (a climbing technique where all climbers climb at the same time while tied into the same rope) the technical rock route “Sun Ribbon Arete” on Temple Crag in the Palisades region of the Sierra Nevada. At about 12,600’ (about 200′ from the summit) a rock broke causing the second climber to fall about 20-30’ before being caught by their rope. The team sent a distress signal via their Personal Locator Beacon, and ultimately Inyo County Sheriff’s Office was notified. 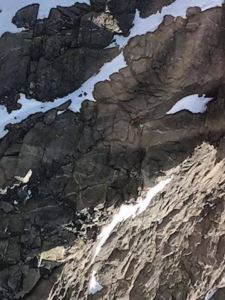 An Inyo County Sheriff’s Office Search and Rescue (SAR) Coordinator was later contacted by the male climber via telephone who advised that they were prepared to spend the night, still tied into their ropes. A call for assistance was made to volunteer members of Inyo County SAR and CHP – Inland Division Air Operations, for a technical rescue the following morning.

On June 16, a member of Inyo SAR was flown to the location and successfully lowered down to the small ledge, where the climber was, from the helicopter. Inyo SAR performed a quick medical assessment and prepared the patient to be extracted. CHP H-82 hoisted the patient and transported her to the Bishop Airport where they were met by Symons Ambulance. Inyo SAR and the male climber were able to climb and hike out without incident.