Inyo County District Attorney Art Maillet stated Tuesday that he will no longer speak to any local media and will no longer give out public information on criminal cases. 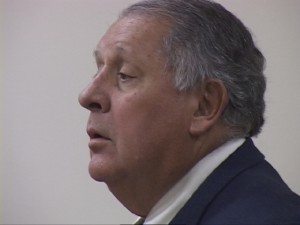 Maillet had failed to return any of our phone calls since before the election. We had called him to find out more about his Assistant Mark Johnson and the release of 1,000 pages on Maillet’s political opponent Gerard Harvey. Maillet never made himself available for comment on that issue which apparently led to the retirement of Johnson. Maillet came to the Inyo Supervisors meeting Tuesday to ask for approval to fill the vacancy left by the departure of Mark Johnson. The Board did say yes to that request and the salary of more than $8,900 per month.

As Maillet walked out I accosted him to ask him why he had failed to return our news calls for more than two months. He angrily replied that he has a new policy. Asked to explain the policy, the District Attorney finally said he would not return any phone calls to any media. When asked why, Maillet said it was because of the “sensationalizing of news” that led to the change of venue of the Louis Leplat murder case.

Judge Brian Lamb had made it clear he ruled on the change of venue because of the fact that two murder cases of very similar nature had occurred very close to one another and he felt there was a risk of local jurors confusing the cases. Judge Lamb said nothing about news coverage.

I asked Maillet about other cases that weren’t going to trial – like the Rusty’s Bar brawl of 2009. Sources had told us that the DA dropped charges against former Mammoth Lakes Police Officer Eric Hugelman. Maillet refused to comment.

He huffed away as I tried to ask him questions about other cases and about his former assistant and the confidential documents released by his office about his political opponent. DA Maillet ignored the inquiries.

We work to provide daily news to all of the Eastern Sierra, in the tradition of Eastern Sierra News Service and the Sierra Wave. We bring you daily happenings, local politics, crime, government dealings and fun stuff. Please contact us.
View all posts by News Staff →
Local Police Confirm Visit by Immigration and Customs Enforcement
Bureaucrat Beat: Who Make$ What? Brain Power and Compromised Senate
1 Comment
Newest
Oldest Most Voted
Inline Feedbacks
View all comments

When are they going to fire him, I over heard him saying that, the court case is still going on in Ventura, this town is so corrupt also oust Joel, he is a bad D.A. depends on his mood swings and arrogants that day. Millat is just one bad fish… Read more »