By News Staff on April 19, 2014 in Government Agencies/Utilities

Mammoth Brewing Company revives storied Whiskey Creek location, appealing to both local community and craft beer enthusiasts in the region and beyond 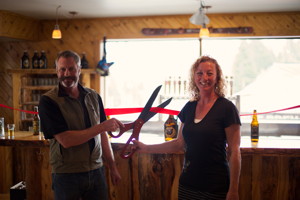 “The history of Mammoth Brewery and the great community of Mammoth Lakes go hand-in-hand,” said Sean Turner, co-owner of Mammoth Brewing Company.  “We think our passionate craft beer aficionados as well as those who look to enjoy a drink in an incredible venue will be pleased; the new tasting room space is larger, it’s much more comfortable, and the views of the Sherwin Range mountains are amazing.“

The tasting room will feature 13 beers on tap as well as the brewery’s extremely popular “Mammoth Imperial Root Beer.” In addition to the opening of the new tasting room, there will also be a seasonal outdoor Beer Garden opening by July 1 for patrons in the summer months, along with an on-premise pub in the future.

The opening of the new tasting room for Mammoth Brewing Company comes just a few months prior to the 19th annual Mammoth Festival of Beers & Bluesapalooza Festival, July 31 – August 3.  Often recognized as one of the most renowned craft beer festivals thanks to its rich history and amazing collection of craft beer and blues talent, the festival this year will feature more than 20 bands throughout the weekend and beers from over 80 craft brewers during Saturday’s Grand Tasting.

Mammoth Brewing Company has been brewing craft beer at altitude in Mammoth Lakes, California since 1995. With a production capacity of 8000 bbls (beer barrels) in 2014, Mammoth Brewing Company currently distributes in the Eastern Sierra, Yosemite National Park, Reno, Tahoe and Truckee, along with recently expanded distribution into Santa Barbara and San Luis Obispo, and the Lancaster/Palmdale areas. For more information please visit http://www.mammothbrewingco.com

About Mammoth Festival of Beers & Bluesapalooza

The 19th Annual Mammoth Festival of Beers and Bluesapalooza will take place from July 31 – August 3, 2014 in Mammoth Lakes, California. The Grand Tasting on Saturday, April 2 will include offerings from over 80 microbreweries and more than 20 bands. Music is featured from Thursday night until Sunday afternoon, and 2014 scheduled performers include Buddy Guy, Tab Benoit, and the Taj Mahal Trio. For more information and a full schedule, please visit http://www.mammothbluesbrewsfest.com

We work to provide daily news to all of the Eastern Sierra, in the tradition of Eastern Sierra News Service and the Sierra Wave. We bring you daily happenings, local politics, crime, government dealings and fun stuff. Please contact us.
View all posts by News Staff →
Motorcycle versus pick-up injures one
Fire near 5 Bridges burns more than 100 acres
1 Comment
Newest
Oldest Most Voted
Inline Feedbacks
View all comments

good to see a company growing up here.