This summer two large marijuana farms were found on the east slope of the White Mountains. Officers also eradicated another farm, said to have been worth $29 million dollars, in the Glass Mountains east of Crowley. Last summer, law enforcement eradicated 30,000 plants in the Sierra between Lone Pine and Independence. Officers are in agreement that these large outdoor marijuana farms are the work of drug cartels from Mexico. 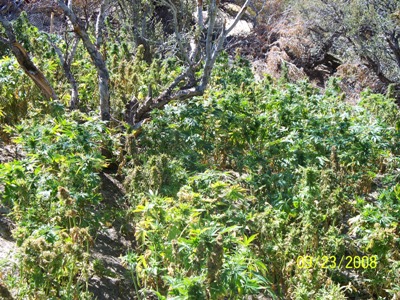 We spoke with Forest Service Special Agent Diana Nichols about what appears to be a new problem in the Eastern Sierra. Agent Nichols explained that while the large outdoor farms in the Eastern Sierra may only go back a few years, law enforcement has fought this problem for fifteen years on the west side of the Sierra. Its incredible how huge the problem has gotten, she says.

One trend that Nichols sees with these outdoor grows is that the cartels are planting at higher elevations.

Up until about three years ago, Nichols reports that the marijuana grows topped out at 5-6000 feet in elevation. Last year, the large outdoor farms in Inyo County were found as high as 8,000 feet. At 9400 feet in elevation, the Middle Creek farm in the White Mountains was the highest farm that Nichols had ever seen.

With three to six months spent camped out on these marijuana grows, the farmers seek out remote spots where they wont likely have any contact with the public. In the recent raid in the White Mountains, the plants were tucked into cleared areas underneath and around large mountain mahogany bushes.

Whether its a spring or a creek, the farms need to have access to water. Black PVC irrigation tubing in remote areas is a sign that a farm is nearby. Propane tanks for cooking, De-con and rat traps for pest control, along with trash from living on site for months on end are also found near these outdoor grows.

Good grow sites may be used year after year. The trash pit at the Middle Creek farm probably contained two to three years worth of garbage, according to Nichols.

If you do start to see these signs while hiking in some remote area, officers don’t need you to investigate thoroughly. Agent Nichols advises that you back out quietly and report what you found to law enforcement. Come back alive, she says.

This year, law enforcement tore up 35,000 plants on the Inyo National Forest. This doesn’t count what was missed, Nichols says. After the Inyo Complex fires last year, investigators found two deceased men in what was believed to be the burned over remains of a marijuana farm near Independence.

Despite the thousands of plants eradicated in the Eastern Sierra, the drug cartels continue to make money. Its obviously profitable, or they wouldn’t keep coming back, Agent Nichols reports.

We work to provide daily news to all of the Eastern Sierra, in the tradition of Eastern Sierra News Service and the Sierra Wave. We bring you daily happenings, local politics, crime, government dealings and fun stuff. Please contact us.
View all posts by News Staff →
Wow! Snow
Trial Set in WAMU Fraud Case