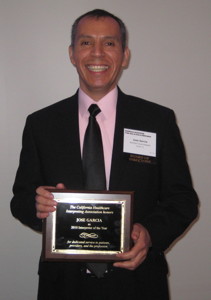 Jose Garcia is committed to educating health care providers, and our community about Healthcare Interpreting.   He says it is, “not just about speaking two languages” and that “it can be very challenging,” but this is why he likes it.  Healthcare Interpreting is much more than simply interpreting between two languages. It is a skill that combines an understanding of medical terminology, knowing a great deal about both languages that are being utilized (syntax, grammar, pronunciation) and bridging the cultural gaps that exist between the patient, the provider and the healthcare system. There are approximately 400,000-600,000 words in the English language, while there are only about 200,000 words in Spanish (combining all regionalisms).  Therefore, it typically takes many more words in Spanish to express the same thought than it does in English, and straight word for word interpreting, taken out of context, can be completely meaningless.  Additionally, the cultural cues an interpreter can pick up and share with a healthcare provider, such as attitudes and believes regarding screenings or taking medications, can be the difference between life and death for patients.

A number of years ago a Spanish speaking mother brought her son in to an Emergency Department in Florida for food poisoning.  An interpreter was not utilized and when the mother said “intoxicado” it was assumed that she meant her son was intoxicated.  This rather egregious medical error resulted in permanent brain damage (quadriplegia) for her son who was never treated for food poisoning, and a rather large law suit for the hospital.

Until 1996, there were not really standards in place to guide interpreting in California healthcare settings. Up until this time, hospitals were using all available bilingual employees for interpreting for patient care.  Unfortunately this method yielded many medical errors resulting from poor communication.  This inspired a group of professionals to create the California Healthcare Interpreting Association (www.chiaonline.org<http://www.chiaonline.org>). CHIA’s mission is “Healthcare interpreters and providers working together to overcome linguistic and cultural barriers to high-quality care.”

In 2004 Jose Garcia was working for Mammoth Hospital as an interpreter and translator.  As a native Spanish speaker and Dentist familiar with medical terminology, Mr. Garcia thought that healthcare interpreting would be simple; however it didn’t take long for him to realize that Healthcare Interpreting is much more than simply message conversion between languages.  It was about this time that Katharine Allen (a CHIA Board Member and Bishop resident) started providing local courses for Healthcare Interpreting. Mr. Garcia recognized the value in this type of training and enlisted in several other courses.  Within six months, he was promoted to the Supervisor of Interpreter Services and began creating policy for healthcare interpreting at Mammoth Hospital.  As approximately 50% of the year-round population in Mammoth Lakes is Hispanic, Mr. Garcia identified an immediate need to hire five full time interpreters and ten dual-role interpreters to provide the 24-7 coverage that was needed in the Emergency Department, Obstetrics Unit, and Pediatric & Family Clinics.

Mr. Garcia became more involved in CHIA as the years progressed and by 2007 he was a Board Member serving the organization in a variety of roles, such participating in the education and membership committees.  Mr. Garcia has volunteered countless hours to CHIA participating in conference calls, and attending meetings representing the state, interpreters and patients.   Last November, elections were held for 7 of the 13 current Board of Directors positions and he retained his seat on the Board.  During the Board meeting held on January 23, 2013, Mr. Garcia was elected President Elect of CHIA and began his first year of a three year term.

Mr. Garcia is intent on providing Interpreting Services for Northern Inyo Hospital that focus on the health, confidentiality, and wellbeing of the patients we serve.  Northern Inyo Hospital’s trained Healthcare Interpreters, with the help of services such as the Language Line (over-the-phone interpreting), and the video interpreting service from the Health Care Interpreter Network can provide interpreting in well over 170 languages, a service that residents, tourist-patients and healthcare providers all find invaluable.

We work to provide daily news to all of the Eastern Sierra, in the tradition of Eastern Sierra News Service and the Sierra Wave. We bring you daily happenings, local politics, crime, government dealings and fun stuff. Please contact us.
View all posts by News Staff →
Pup named Porky and 3-year old Emma
Red carpet right here