A little more than 24 hours after mud and rocks rolled down the mountainside covering sections of Hwy. 168 West above Aspendell, Inyo County and CalTrans crews were able to open a temporary lane freeing an estimated 50 vehicles parked at Sabrina and North lakes. 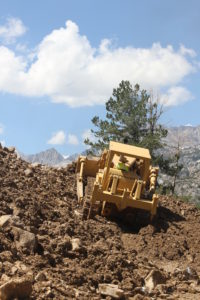 County’s D-8 pulls dirt off the pile, extending the right lane so trapped vehicles could make it down the mountain/Photos by Deb Murphy

The skies opened up shortly after the vehicles were lead through a series of three slides, stopping any additional road work.

According to reports, approximately 50 people walked out Sunday afternoon, leaving their vehicles in the lakes’ parking lots. One fisherman from Oregon stood in the Cardinal Village parking lot watching the heavy equipment carve out a path, wondering when he’d be able to get on the road home.

Another story: a couple of friends had spent the day at South Lake, then drove to Sabrina Boat Landing for a slice of the café’s famous pie.

A few brave souls tried the foot path mid-way down the canyon, but the path was impassable below the slide.

While those stranded are now free, it is uncertain when the highway will be back to normal. According to CalTrans’ Terry Erlwein, deputy district director of maintenance and operation, the department will bring in technicians from Sacramento to determine if the mountainside is stabilized. 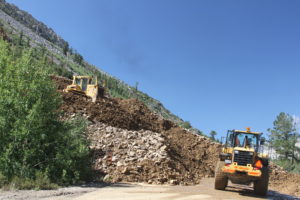 A D-6 stabilizes the uphill side of the slide, pushing debris down to the loader

Mid-morning Monday, a helicopter out of Apple Valley flew reconnaissance over Sabrina and North lakes to try to figure out just how many cars and/or people were at the two lakes. The number relayed to personnel on the ground: between 50 and 100 vehicles. Cell service was non-existent; the only contact above the slide was by land line to the Lake Sabrina Boat Landing.

According to Inyo County Sheriff’s Department, contact had been made with the California Office of Emergency Services and arrangements made to bring a Chinoock helicopter from the National Guard if necessary to get the stranded people off the mountain. 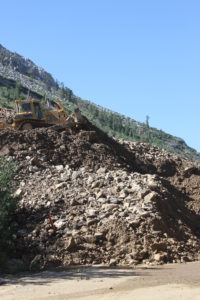 The County’s dozer and CalTrans loader worked in tandem with Keller Tjernagal and Justin Davis at the helms. The crew stabilized the muck on the up-hill side of the highway and created an extended berm on the downhill side. Rather than take the dirt and rock slurry down to the pavement, the crew widened the right lane to allow an escorted passage of the trapped vehicles.

County Public Works Road Department head Chris Cash praised both men’s skill and experience as they wheeled the heavy equipment through the muck. 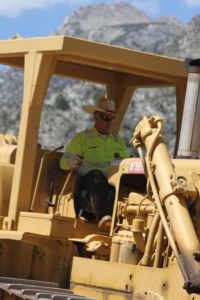 BISHOP — Inyo County Sherriff, California Highway Patrol and the California Department of Transportation (Caltrans) would like to inform the public that access to remove previously trapped vehicles will be available today until 3:00 p.m. Access past the road closure will be with law enforcement escort only.

USFS has closed Sabrina Lake and North Lake campgrounds and trailheads (Piute Pass and Lamarck Lakes), therefore there will be no incoming traffic allowed. Today’s opening is restricted to vehicle removal only.

Thunderstorms are predicted today and may impact the stability of the slide, forcing authorities to close the road. Consequently, vehicle retrieval efforts early on may be more successful.

Caltrans has planned the hard closure of State Route 168W to begin tomorrow, July 25, 2018, for cleanup efforts. There is no anticipated date for reopening the road.

For the latest highway information please visit the Caltrans QuickMap site at quickmap.dot.ca.gov or call the Road Condition

BISHOP — The California Department of Transportation (Caltrans) would like to inform the traveling public that State Route 168W (Bishop Creek/ Aspendell) is closed at approximately post mile 2.

At least three large sections of the road have been affected. The most eastern slide is reported to be 80-100 yards long and over 30 feet tall. Caltrans crews and CHP are working to assist up to 50 cars that are trapped behind the slides. Crews estimate several days working to reopen this road.

Currently, Caltrans and Inyo County are working to clear and stabilize the slide to open a single lane for evacuation purposes only. Operations to clear the roadway will continue after the evacuation. Additional rainfall may impact efforts. Additionally, a CHP A60 helicopter has arrived from Apple Valley to assist in any way necessary.

The traveling public is advised to use alternate routes and proceed cautiously when driving through mountainous areas.