By News Staff on September 17, 2014 in Government Agencies/Utilities 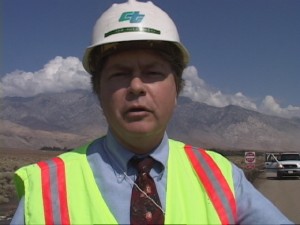 (Caltrans press release – It is unknown at this time who will replace Hallenbeck.  Officials are waiting for appointment of an acting District 9 Director.)

Bishop – The California Department of Transportation (Caltrans) is proud to announce the promotion of Tom Hallenbeck, District 9 Director.  Tom has accepted the position of Chief of the Division of Traffic Operations in Sacramento, Ca. effective October 1, 2014.

Tom started with Caltrans right after graduating from Union College with a Civil Engineering degree.  He began his career in the Office of Structures, Design & Construction working on bridge projects throughout the state.  In 1997 he accepted the position of District 9 Director in Bishop, CA.

About his time as District 9 Director in Bishop, Tom stated, “It has been an honor and pleasure to serve the people of the Eastern Sierra for the last 17 years.  I am excited about taking on new challenges but also sad to leave the Bishop community that we have been a part of and raised our family in.  I look back on many accomplishments but look forward to the innovations and applications that will change the way we drive.”

Tom also stated that during his tenure in District 9, “We have responded to floods, fires and avalanches.  We have rehabilitated every rest area and almost every “Main Street” in the district and left them more accessible and more complete.  We have expanded and improved the US 395/SR 14 corridor, and by so doing, saved countless lives.  It has been a privilege to be a part of helping improve and maintain the El Camino Sierra and all of the roads in District 9.

In his new position as the Chief of the Division of Traffic Operations, Tom will perform technical activities in support of the program and local agencies, respond to incidents on State highways, provide traffic design and support for project delivery, and integrate new technology and innovations into our system that will change the way we travel on our highways.

We work to provide daily news to all of the Eastern Sierra, in the tradition of Eastern Sierra News Service and the Sierra Wave. We bring you daily happenings, local politics, crime, government dealings and fun stuff. Please contact us.
View all posts by News Staff →
June Fire update
Reckless driving arrest
10 Comments
Newest
Oldest Most Voted
Inline Feedbacks
View all comments

It’s nine AM and I just got out of bed. Where the heck is my pension??? Tom, before you leave would you please make the speed limit on 395 through Independence 25 MPH like Lone Pine? The big trucks wake me up at night. Or at least tell me how… Read more »

Trouble
Reply to  Mongo the Idiot

Mongo, ya better hurry and go to court ASAP, before that leaves Indy also!

Note: there are a lot of Caltrans visits to http://www.sierraeast.org, followed by ‘thumbs down’ on the critical comments above.

Too bad Inyo folks won’t summon similar energy to save their communities…perhaps they need a financial incentive too?

By my count he probably has 2 years until his retirement. This is all part of the Government game to max out your salary in your last two/three years of service.. Mark my words he will be retired in 2-3 years with his hefty Public pension and benefits package. Then… Read more »

I think his legacy is that he has and will save countless lives of travelers up and down the 395.

Like you, Hallenbeck plays the safety card without the facts to back it up. Most accidents occur when 4-lanes reduce to 2, so any 4-lane solution improves safety, e.g. widening the existing alignment rather than carving a massive bypass and leaving the old highway for Crystal Geyser trucks. Do your… Read more »

If you studied the so called research that you speak of, then you would also note that head on collisions would still occur on the 4 lane existing alignment because there would not be a median separation as is proposed with the new alignment, which by the way will virtually… Read more »

Professional bureaucrats often make decisions that have little to do with what professional engineers recommend. Caltrans is as political as any other bureaucracy with lots of autonomy and funding. The Inyo County Supervisors do not agree with Hallenbeck’s bypass plan, yet they roll over and defer, as is their sad… Read more »

What engineers redesigned the California City fiasco and just moved the danger a little more south!! They are so brilliant has anyone realized why there are no stop signs all the way around at Pearsonville?? Because the geniuses who designed the widening did not figure in enough room between needed… Read more »

Unless Inyo finally wakes up when Caltrans’ final EIR is released, Hallenbeck’s legacy will be the disintegration of Olancha/Cartago from Owens Valley and its ultimate destruction thanks to his egregious I-395 bypass plan. see: http://www.sierraeast.org