September 9, 2013. Thanks to the generosity of players, sponsors and donors to the 14th Annual Mammoth Lakes Foundation Golf Classic, sponsored by Ron & Shirley Heck, the annual event was a winner for all involved. 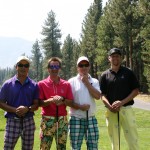 One hundred forty-four players enjoyed beautiful weather and helped make a difference in the community. Thanks are due to so many, including Dave Schacht of Sierra Star Golf Course who coordinated all the course activity, including a “Beat the Pro” contest on Hole 2 and a Putting Contest after all the players finished the course.

Schacht was also an outstanding emcee. Eleven MLF scholarship students sold raffle tickets at the Par 3s while meeting the players and sharing with them what going to college in Mammoth means to them. Numerous volunteers helped throughout the event with everything from registration to silent auction.

There was an impressive list of sponsors—attested to by the Hole and Tee Sponsors signs planted throughout the 18 hole course, as well as sponsors for Lunch (Jack & Abby Smith); Beverages (Charles Comfort/CFT Gas & Oil); Awards Party (Mammoth Mountain Ski Area); the Putting Contest (Neil Sherman/Industrial metal Supply); in addition to an amazing roster of golfers who had loads of fun throughout the day. 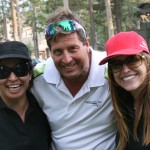 winning low score team with a final number of 53 for the day (beating last year’s winning team by one stroke) included Ian Birrell, Guy Bien, Christian Newman, and Ryan Clark. Watch for their team picture to appear inside the Clubhouse at Sierra Star for the next year.

The Putting Contest, entered by a separate ticket purchase, was eventually won by Chris Jenkins who showed his skills on the putting green and took home a $500 Gift Certificate for the Sierra Star Pro Shop.

The Superticket winner of a seven-night stay at Casa Russell in the desert was Laurentius Harrer. This year’s raffle included Two Grand Prizes; the winner of the 11’ Paddleboard donated by Footloose Sports was Jerry Dauderman, while the second grand prize for Golf at Spanish Hills with Bart and Ginny Hall was won by Brent Truax.

In total over 30 raffle prizes were awarded to the participants. A complete list of Sponsors for the event include:

Money from the Golf Classic goes toward supporting student scholarships, increasing cultural programming for the community and other educational support programs.

Next year’s tournament is already scheduled for September 7, 2014, so save the date!

The Mammoth Lakes Foundation is dedicated to supporting higher education and cultural enrichment in the Eastern Sierra. Recent successes include supporting Cerro Coso Community College that graduated its largest class of students in 2013, creating and managing a state-of-the-art student apartment facility, providing 25 college scholarships to local students for the fall 2013 semester and over 500 to date, and creating and expanding offerings at the Edison Theatre performance space at the Mammoth Lakes Foundation. For more information or to make a tax deductible donation please contact the Foundation at (760) 934-3781 or visit MammothLakesFoundation.org. Our nonprofit work is only possible through your generosity.