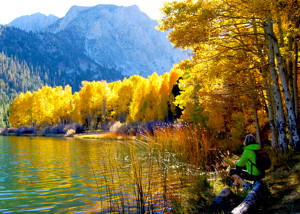 Alicia Vennos hiked to Walker Lake for this photo of aspen at its peak.

The duration of this autumn’s show in California’s Eastern Sierra has astounded many long-time fall color watchers.  It has become known as the autumn that will not fall, because the peak seems to endure despite wind, snow and time.

Much of the lower elevations of Mono County along US 395 were peaking this past week with the June Lake Loop (Hwy 158) garnering statewide title as Peak of the Week.  In the Eastern Sierra, June Lake, lower Lee Vining Canyon, Walker Lake and lower Lundy Lake are best bets for brilliant fall color this week and next.
Bishop Creek Canyon is past peak, though the aspen of Aspendell at a low elevation in the canyon, were deep orange and gold and peaking gloriously.  They should have let go of their branches, but many continue to hold on.

The upcoming areas to peak are predicted to be Plumas, Lassen and Siskiyou Counties in the Shasta Cascade region.  Unlike the bold splashes of lime, yellow, orange and red color in the Eastern Sierra, the Shasta Cascade is delicately brushed with yellow, rose, orange, chartreuse, auburn, burgundy and gold.  Most of the region remains patchy, though is expected to turn by the end of October.

The Redwood Highway (U.S. 101) was reported to be peaking.  The best viewing is along the Eel River and streams.  Look for yellow bigleaf maple and crimson poison oak, but don’t touch.

Aspendell (Peak to Past Peak) – Aspen in and around the small town of Aspendell in lower Bishop Creek Canyon have been glorious this past week.  Warm days have intensified the color.  Some trees have lost their color, though it’s still beautiful.  This week is probably all that this area has left.

Upper Bishop Creek Canyon (Past Peak) – YOU MISSED IT!

Lower Rock Creek Road (Near Peak – 50 – 75%) The lower trail is finally turning and should be close to peak this weekend.

Convict Lake (Peak to Past Peak) – Convict Lake has lost most of its leaves, though there’s still bright color at lower elevations from trees that turned late. GO NOW!

Mammoth Lakes (Peak to Past Peak) – The last of the color in Old Mammoth is showing, but this will probably be its last week. GO NOW!

Lee Vining Canyon (Peak – 75 – 100%) – Groves at the base of Tioga Pass Rd./Hwy. 120 just north of the US 395 junction in Lee Vining Canyon are just turning now while along Poole Plant Road, the color is peaking and again should be amazing this weekend, as well. GO NOW!

Sonora Pass (Peak to Past Peak) Sonora Pass and Leavitt Meadows are also glowing, with some areas and stands past peak.   GO NOW!

Walker River (Patchy – 10 – 50%) – The drive along the West Walker River in north county is becoming golden as the trees and willows along the shore get increasingly brighter.

Walker, Coleville, Topaz  (Patchy – 10 – 50%) – Spots of bright yellow and lime are seen among the Antelope Valley’s stands of black cottonwood.

Monitor Pass (Past Peak) – YOU MISSED IT!

The famed exotic sugar maple beside the Yosemite Chapel has shed most of its ruby leaves and sections of the Tioga Road are now past peak.  Isolated stands of yellow aspen can be seen from the Tioga Road down Tenaya Canyon.

The color is descending toward Yosemite Valley.  There, black oak, dogwood and bigleaf maple have not yet begun to show much color, though the area surrounding Fern Spring at the west entrance to the valley is the first to brighten.

In the heart of Yosemite Valley, the black oak are still green, though they approach peak at Halloween and their black branches are typically dressed in bold orange leaves by the first of November.

Tioga Road, Yosemite National Park (Peak to Past Peak) – Aspen at the highest elevations have lost color, though those near 7.000′ still show yellow.  Willows and shrubs are showing gold and crimson. GO NOW!

Quite a bit of color developed in the Shasta Cascade this past week, with three of its eight counties now almost at Near Peak.  The Shasta Cascade straddles the Southern Cascade and Northern Sierra mountains, which have shared foliage, though different wildlife.

Plumas County (Near Peak 50%-75%) If you plan to see Plumas County at peak, don’t wait much longer. Plumas is near peak with vibrant red and yellow scattered throughout the county.  Quincy is at peak. GO NOW!

Tehama County (Patchy 10%-50%) Tehama should be at near peak by the end of the month.  River towns such as Cottonwood and Red Bluff are now having their riparian parks populated with reds and yellow oaks and willows.

Butte County (Patchy 10%-50%) The urban forests of Chico are almost near peak. Chico’s Bidwell Park, the Abbey of New Clairvaux in Vina, walnut orchards along Hwy 99 and the foothill community of Paradise are prime locations to see peak around Halloween.

Siskiyou County (Near Peak 50%-75%) With cooler weather descending into Northern California, Siskiyou County should also be at peak by Halloween.  The color is particularly impressive when set against the backdrop of snow-covered Mt. Shasta which received a few inches within the past week. GO NOW!

Trinity County (Patchy 10%-50%) Trinity County is almost at near peak and predicted to show in early November. The historic town of Weaverville on Hwy 299 is a favorite fall color destination, with yellow bigleaf maple and chartreuse wild cucumber along the Trinity River.

The Redwood Highway (Peak – 75 – 100%) – The Save the Redwoods League reported “the redwood forest is ablaze with color.”

Redwood National and State Parks (Past Peak) – YOUMISSED IT!

Big Bear (Past Peak) – YOU MISSED IT!

Lake Gregory (Patchy – 10 – 50%) – Beautiful color fringes the lake as black oak provide a crest of orange among the pines.  Peak will develop over the next two weeks.

I agree…it has been one of the most glorious autumn’s we have seen in the high country in a long time! Took tons of wonderful photos and enjoyed hiking around in the fantastic weather!!