By News Staff on September 11, 2018 in General Misc. Stories

Five-year-old June Mitchell overheard her parents talking to friends about the horses injured at the Big Pine Saddle Club back in June of this year and the concern over the high cost of medical treatment for the horses facing their owners. She told her mother, Kim, that she was worried about the injured horses and she wanted to help.

June went home and made a special gift bag and placed her entire savings of $3.16 from her piggy bank in it. She then gave it to the Big Pine Saddle Club to be added to the reward for information leading to the arrest and conviction of the person or persons who set fire to a truck on the property and savagely attacked several horses. Thanks to the five-year-old’s donation, the reward now sits at $18,732.66.

In addition to the reward money, the Saddle Club’s online GoFundMe campaign has collected $7,945 of $10,000 goal to have electricity, security lighting and cameras installed to prevent future incidents. Donations are still be accepted.

June later had her picture taken with Saddle Club member, Margaret Hunter, who 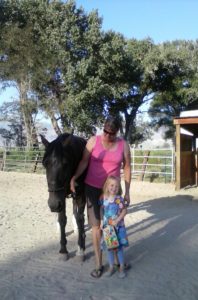 is also her neighbor. They are shown standing next to Choco, the most seriously injured horse. Choco required dozens to stitches to close its wounds,but according to its owner, Yvette Hannon-Rossi, “Chocó’s wounds have healed well with a lot of tender love and care. He is the one shown on the reward posters.”

Kim Mitchell explained that her daughter June was born prematurely and that she and her husband had to spend many weeks away from home to be with her while she was in the hospital.

“Thanks to the generosity of the Ronald McDonald House and others,” said Kim, “my husband and I were able to be with her and we had a place to stay. Because of that experience we have tried to raise June to have a ‘generous heart.’’

June’s mom said that whenever June is asked what she wished for when she blows out a birthday candle or throws a penny into a wishing well, she always responds with, “I want a horse.”

While June may not be getting a horse of her own any time soon, there are plenty of Saddle Club members who will likely be more than happy to let her share theirs.

After all, who can resist a little girl that not only loves horses, but has been shown to have a generous heart?

Editor’s note: You can make a contribution directly to the reward fund at Union Bank account number 0110245092 or to the Big Pine Saddle Club’s Go Fund Me Page at: https://www.gofundme.com/big-pine-saddle-club.