The Owens Valley has been home to cowboys ever since Samuel Bishop drove a herd of about 500 cattle through the valley in 1861.
The Eastern California Museum’s 2017 Calendar celebrates those hearty souls who made a living working with cows and horses, and helped shaped the culture and history of the Owens Valley. 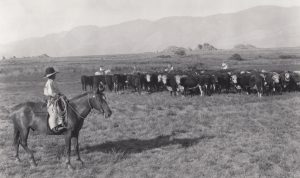 The calendar features a broad array of photos that give a glimpse of the “cowboy way” from the earliest days to more recent times.
The cover photo shows a “young Johnny Lubken” decked out in some rather fine cowboy attire as he sits his horse and surveys a docile herd of cows.

Showing a bit more grit and reality are several photos of local cowboys branding cows, complete with taut ropes and plenty of dust. 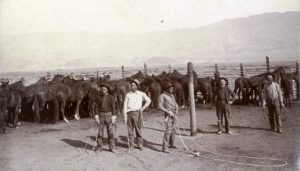 Some of names old-timers might recognize include Fred Burkhardt and Chappo Bellas, in one photo, and Sam Lewis and JD Callaway in another.

Then there is the photo of “Skinny Gates” riding his horse down the steps of the Inyo County courthouse while holding a US flag. The Lacey clan is captured in a group photo from the 1940s in Browns Meadow. 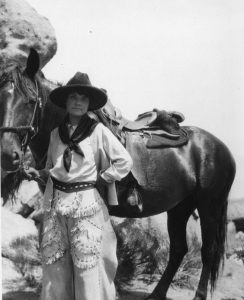 A rare photo shows the famed Monache Meadow rodeo, with dozens of cowboys ready for action, and a small photo of not one, but two bucking broncs trying to toss their riders.

A classic photo shows a group of cowboys and a corral full of horses on the Mairs Ranch, outside of Independence, in about 1900.

Another rare photo shows a huge herd of 5,000 cattle and cowboys on the Ricky Ranch, a sprawling spread in the early 1900s that eventually became the Eaton Ranch, south of Big Pine.

Not to be outshined were the area’s cowgirls. Dressed in stylish western fashions including custom chaps and skirts with great hats, the women cut quite a figure. In a bit of Western marketing, an attractive cowgirl in a tailored outfit says, “welcome to the Benton Dude Ranch.” Of course, a couple of mule skinners and their mules are included, as are Basque sheepherders who escorted thousands of sheep through the Eastern Sierra into the 1960s.