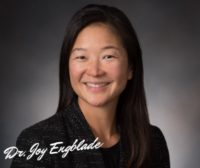 Joy Engblade, MD MMM FACP, has accepted the Chief Medical Officer (CMO) role for the Northern Inyo Healthcare District. In this new role, Dr. Engblade will engage, align, and act as a liaison between the District medical staff and its administration. She will also provide oversight to key departments. Her role begins Monday, April 5.

Dr. Engblade continues the work began by her predecessor, Dr. William Timbers, who stepped into this role in an interim capacity during the coronavirus pandemic’s early months. Dr. Engblade will work closely with NIHD’s medical directors, medical staff, and administration on projects needing an operational and clinical alignment. These projects include continued pandemic response, ongoing physician recruitment and retention, and service line development.

Dr. Engblade says her goal is to unite the medical staff through communication, collaboration, and empathy for the difficult situations that practicing clinicians face. “I am grateful for the opportunity to become the next CMO and continue to support our providers during this challenging time,” she says.

Having served NIHD since 2014, Dr. Engblade most recently held the position of Hospitalist Program Director and worked as an active Hospitalist, serving patients within the hospital’s Medical-Surgical floor. Her experience includes service to University of Kentucky Healthcare, Lake Tahoe’s Barton Memorial Hospital and Newport Beach’s Hoag Hospital. She received her medical education in Ohio and Washington before earning her Masters of Medical Management from the University of Southern California.

Kelli Davis, NIHD Interim Chief Executive Officer, said the District is grateful to Dr. Timbers for his dedication and commitment to the District, its staff, and our community. His strong leadership allowed the District to weather the pandemic’s challenges and those facing NIHD in a time of administrative transition. “His vision and perspective for what the District could become have set us on a path for future success,” Davis said.

Dr. Engblade echoed Davis’ sentiments, going on to say that “Dr. Timbers commitment to the District is one that will resonate for years to come.” Dr. Timbers will continue his work in NIHD’s Emergency Department with the Eastern Sierra Emergency Physicians.

During Wednesday’s regular board meeting, the NIHD Board of Directors announced its recruiting firm selection for its upcoming CEO search. The San Diego-based national recruiting firm, AMN Leadership Solutions, will oversee the search for a permanent CEO. The NIHD Board chose AMN from among several national firms to conduct this critical recruitment. The District hopes to name its CEO selection at the beginning of its next fiscal year this July.

Welcome and Congratulations Dr. Engblade! I was also a patient of hers when she was filling in at Rural Health Center. All that was said from Local Athlete and Ms. Smith, I totally agree.

“In this new role, Dr. Engblade will engage, align, and act as a liaison between the District medical staff and its administration.”

What does “engage and align” mean?

“Engage,” i.e., “to talk and listen” in a conversation in which the parties talk to, listen, share, and respect each other’s points of view in order to “Come to an agreement or consensus, i.e., “Align,” which is just another way of saying, “being clear and straightforward of an organization’s clarity… Read more »

Absolutely love Dr. Engblade. Excellent choice. She is a pleasure to work with, knows her stuff and is just all around one of the best kind of people. I only see good things coming from this decision for the hospital.

What a great decision Northern Inyo Hospital made with Dr. Engblade. I was her patient at NIH during my 7 day stay. She is knowledgeable and compassionate. I was hoping that Dr. Engblade would open a practice in Bishop. But, this is the next best thing. Congratulations!