Jim Demetriades laid out an attractive picture of his Old Mammoth Place project, a
cornerstone to the revitalization of downtown Mammoth, at the Mammoth Brewing
Company last Thursday. 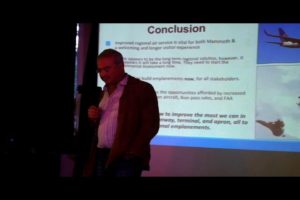 The Place, slated for a square block where the Sierra Nevada Resort now stands, includes 345 hotel rooms, a skating rink, small shops open-air in the summer, with a 14,000 square-foot facility for conventions and major events—something Mammoth
Lakes doesn’t have now. Demetriades’ goal was to bring people to town and make sure they stay here for a while.

He outlined his ability to make money, in Mammoth, in the tech world and at The Landing in Tahoe. Some of that money would be spent making sure The Place was energy neutral. Demetriades was even willing to spend a cool million on an existing hotel to house workers on the project. 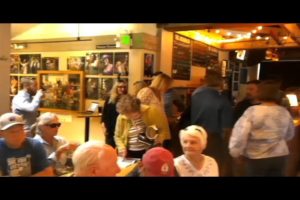 Old Mammoth Place has already been approved by the Town Council. But Demetriades’ big question to those at the presentation was: “does the Town Council want us to do this.”

In a joint meeting with Town Council and the Planning Commission more than a year
ago, the Town wanted roughly two dozen questions answered to better define
Demetriades’ idea of a Development Agreement. So far, those questions haven’t been answered. 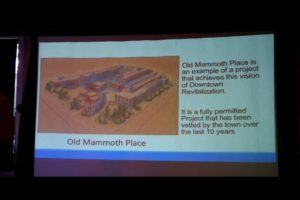 That original presentation envisioned a 20-year period of TOT relief—with the developer retaining a percentage of taxes collected to defray the cost of the project.
According to Demetriades, he can cover the $250 million price tag for The Place. But if the Town provides TOT relief and goes full bore on a new airport terminal as Inyo County slogs through what the developer describes as a long process to build-out the Bishop airport—that will make it far easier to get financing on the hotel/convention center project.

An analysis done by Demetriades came up with embarrassing numbers on the
Mammoth facility. Twenty-three thousand folks used it, compared to 250,000 flying into Aspen and 353,000 to Jackson Hole. He reminded the crowd a shift in technology will allow 100-seater planes to land in the Eastern Sierra and the Federal Aviation Administration will pick up 90-percent of the tab on the initially proposed 40,000 square-foot terminal.

While the Bishop Airport has the ability to land larger planes, Demetriades estimated it would take five years to get the facility up and running, ten if residents started suing in anticipation of airplanes flying over their homes.

During the Q&A portion of the session, the question was asked “does The Place hinge on the build out at the Mammoth Airport.” Demetriades didn’t really answer that one.

The last official Town Council stand on the airport: postpone any decision on the 40,000 square-foot terminal and let Mammoth Mountain’s Alterra and Inyo County work out the deal for a Bishop Airport build out. More details on the dueling airports will be discussed at a joint Mammoth Town Council/Inyo County meeting in the Council Chambers Tuesday, Aug. 28 at 5:30 p.m. …

“Demetriades’ goal was to bring people to town and make sure they stay here for a while.” We already have this do we not? More than ever, matter of fact. Our shoulder seasons have gotten shorter and shorter over the last few years, have they not? If our little town… Read more »