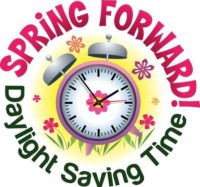 We’re all tired of it. The short days. The early night falls. But there’s relief ahead! Just hold on until this weekend.

2021 Daylight Saving Time (DST) officially starts this weekend, so you’ll be able to enjoy an extra hour of sun in the afternoon. Daylight saving time officially starts Sunday, March 14 at 2 a.m., which for most people in the U.S. means setting your clocks ahead by 1 hour before going to bed on Saturday, March 13. Well, that’s if you care to do so. Consider multitasking and use the occasion to check the batteries in your smoke alarms while you’re at it.

Some people complain that, “We lose an hour of sleep as the clocks are moved forward,” but do we really? What’s preventing someone from just staying in bed for another hour? Especially on a Sunday if not working? How complicated could that be?

So, why do we change our clocks anyway? To save candles apparently.

In today’s modern world, we prefer to burn the candle at both ends.

The origins of daylight saving time, or DST, go back to 1784 when Benjamin Franklin wrote a satirical letter to a Paris newspaper proposing a tax on those whose windows were closed after sunrise. But the idea of moving the clock to lessen the dependence on energy sources, which in Franklin’s day, meant candles, carried over into ours, except instead of candles, we use electricity and light bulbs.

During World War I, Germany put the plan in place in an effort to conserve fuel. Europe soon followed suit, as did the U.S. in 1918. It was abandoned here for a while, but was started again in 1942 by President Franklin Roosevelt in an effort to conserve resources during World War II, and made permanent in 1973, when President Richard Nixon signed the Emergency Daylight Saving Time Energy Conservation Act.

In 2005, President George W. Bush signed the Energy Policy Act, establishing the current schedule. Clocks are set ahead one hour on the second Sunday in March and back again the first Sunday in November.

Of course, the contrarians that we are, there are those among us that want it abolished and have DST set permanently and not fall back in November. California voters approved Proposition 7 to do just that on November 6, 2018. If nothing else, it proves yet again that we are never happy with anything, anymore…including the time!