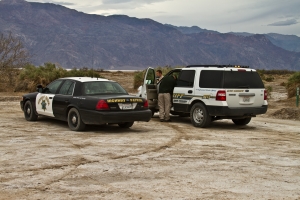 County Coroner as Norman Cox of Carson City. Mr. Cox had sent a letter to his family in early August to say he went to Death Valley to die.

Carson City Deputy Jack Freer contacted Sierra Wave to say he saw the story on our website, www.sierrawave.net, about Cox’s letter to his family and the discovery of his car near Badwater. Deputy Freer said he spends a lot of time in the Eastern Sierra. He and others had decided to mount a free lance search of Death Valley for Cox. They did find human skeletal remains in an area of Death Valley, some 6 miles from where Cox’s car had been found.

Coroner Leon Brune confirmed that positive identification of Norman Cox was made with dental records. An extended search of the area did turn up the entire skull of the remains. As for the cause of death, Brune said that will remain undetermined because of the condition of remains.

We work to provide daily news to all of the Eastern Sierra, in the tradition of Eastern Sierra News Service and the Sierra Wave. We bring you daily happenings, local politics, crime, government dealings and fun stuff. Please contact us.
View all posts by News Staff →
MLPD Officer Torres honored by MADD
Jobs of federal employees saved by last minute budget