It's the time of year for controlled burns. Agencies that own lots of our land believe they should clear off brush and fuels that could turn into serious fires later in the summer. 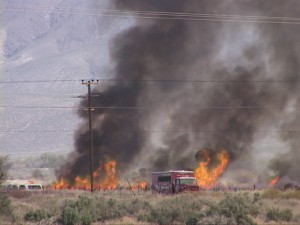 Monday, LADWP, along with CalFire, started a controlled burn project north and east of Big Pine. Smoke was visible from Highways 395 and 168 and even hazy into Bishop. DWP says about 250 acres will be burned over the next se3veral days. The agency also noted that precautions will be taken to keep smoke away from towns.

DWP will work to identify other possible prescribed burn areas for later this spring and summer.

Upham said that as the snow melts, the Forest Service will conduct protective burning in the areas of Smokey Bear Flats and the Owens River.

We work to provide daily news to all of the Eastern Sierra, in the tradition of Eastern Sierra News Service and the Sierra Wave. We bring you daily happenings, local politics, crime, government dealings and fun stuff. Please contact us.
View all posts by News Staff →
Barker Ranch To Be Closed For Investigations
Bureaucrat Beat: Credit Card Calamities, Chinese Debt and 3 Letters