After three years of discussion and plan rearranging, the Clearwater project took a step forward in Mammoth. At their January 7 meeting, the Town Council approved Clearwaters District 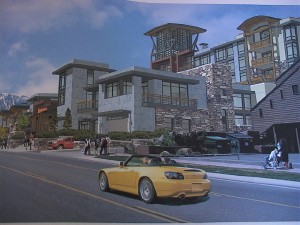 Zoning Amendment, General Plan Amendment and Specific Plan with the indication that the contentious items surrounding the project such as density, height, and community benefits would be dealt with later during the use permit phase. Council is betting on the fact that policy decisions related to the above issues will have been determined by the time Clearwater reaches that phase. This would give them a concrete footing to stand on when determining the specifics of the project.

Not all on Council agreed that this was the way to proceed, and Councilman Skip Harvey voted no on approving the project. Councilwoman Jo Bacon had to recuse herself from the discussion and the vote because she owns property within 500 feet of the Clearwater site. So, the final vote was 3-1.

Later in the meeting, as Council discussed a refinement of planning priorities, Mayor Wendy Sugimura announced that the Mammoth Crossing project application will be put on hold until the policy items have been decided. She added that while Mammoth Crossing wasnt thrilled with the hold up, they had agreed as long as their Environmental Impact Report could continue moving forward.

Town staff will proceed with policy items in the following order:
1. People at One Time (PAOT), which is currently being discussed by a subcommittee
2. Incentive zoning
3. Condo/hotel zoning
4. Height and density

We work to provide daily news to all of the Eastern Sierra, in the tradition of Eastern Sierra News Service and the Sierra Wave. We bring you daily happenings, local politics, crime, government dealings and fun stuff. Please contact us.
View all posts by News Staff →
Local Beef Plan Moves Ahead
25 Arrested in Mammoth Drug Sweep