The population of any community can be divided into three groups: those who can’t imagine life without their devices; those who put up with electronics for business reasons and those who look on electronics with a mixture of fear and loathing. 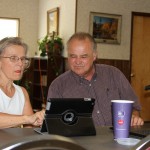 If you fit in the latter group, it might be time to conquer those fears and learn to, if not love, at least be able to use some level of electronic gizmo, whether it be a full-blown desktop, a laptop, a pad, a tablet or whatever computer wizards come up with next. With the completion of high-speed access along U.S. Hwy. 395 and the proliferation of Wi-Fi, there’s no excuse.

The Eastern Sierra Connect Regional Broadband Consortium is making it easy to get the basics through a series of free classes taught by Charles James and held at the Bishop Senior Center Wednesday afternoons. For computer virgins, the Consortium provides IPads to help break down the barrier between reluctant humans and the Internet.

“Students want to be able to communicate with family and friends,” James said. “They’re interested in e-mail, social media, how to do their banking and shopping safely online.” But there are still barriers many will not cross. Bob Suter, on his second retirement, explores the Internet for purchases, but completes the transaction the old-fashioned way: over the phone. His wife bought him an Android for Christmas, “so I wouldn’t mess up her computer,” he admits. Security is a big issue as is de-bugging or cleaning up older devices with anti-virus software.

Some students come in with an assortment of tablet-like devices but little knowledge of what to do with them. According to James, their children have set-up the devices but “don’t tell their parents what they did,” James said. “As a result, the parents don’t know what’s there or how to access the apps.” That was one of Prudence Carr’s issues: how to quickly access her search engine without rifling through every drop-down menu on her pad.

“There are so many different flavors (of devices), it gets confusing,” said James. He’s seen more Androids and Samsung tablets than IPads with starting prices way below the little Macs. While the basics are the same, the devil’s still in the details, which James explores with each student.

The course starts with an exploration of the students’ devices, moves to the Internet and on to the Cloud, a giant storage nebula that provides nearly unlimited capacity for skinny little tablets.

As for social media, the students aren’t exactly looking to stack up Twitter followers. “I can tweat,” Suter said. “I just don’t.”

The beginner classes run from 3-4:30 p.m. followed by intermediate classes, from 5-6:30 p.m. on Wednesdays. The current session runs through July 15; the next starts August 5.