A group of determined residents from Southern Inyo County communities 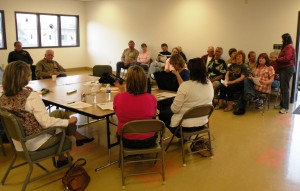 filtered into the Multipurpose Room at Owens Valley School in Independence for a pre-meeting to discuss issues to be brought to the scheduled public meeting with Superior Court Judges Lamb and Stout on Thursday night at the Independence American Legion Hall. That meeting is to have the judges present their rationale for changing the location of the new $30 million courthouse from County Seat in Independence, where the Superior Court has been located since the founding of the County in 1866 to the City of Bishop where both judges live. The meeting is also to give County residents the opportunity to voice their concerns and opinions on the last minute decision made by Judge Lamb, who was elected because of voters from Southern Inyo County communities.

The meeting hosted by the Independence Civic Club was, well, civil. That the voters of Independence and other southern county communities feel betrayed by both judges was evident in many of the comments during the pre-meeting, yet although clearly angry, there was no shouting or ad hominem attacks. In fact it was a very calm, deliberative meeting. The history of the courthouse project was discussed along with the guidelines and regulations from the states Administrative Office of the Courts. Media contacts and offices of local, state and federal representatives were discussed as was soliciting comments from the current crop of candidates for office in the upcoming election.

It was noted that support to reverse the announced decision by Judge Lamb to the Inyo County Board of Supervisors last Tuesday, has been coming in from Bishop as well. A number of actions were being considered should the decision remain unchanged, including looking into the possibility of a public referendum to recall efforts if needed. There was no anger directed at the City of Bishop. In fact there was surprising support for new court facilities needed in Bishop as well, but not at the expense of Independence.

The public is invited to this important meeting to hear Judges Lamb and Stout explanation for their last minute decision to change the main courthouse location. The public is encouraged to share their views and feelings as well. It is hoped that residents from north and south county will attend representing both sides of the issue.

The meeting is tonight, Thursday, March 25 beginning at 6:30 p.m. at the Independence American Legion Hall, on the west side of Main Street, across from the Subway/Chevron Station.

We work to provide daily news to all of the Eastern Sierra, in the tradition of Eastern Sierra News Service and the Sierra Wave. We bring you daily happenings, local politics, crime, government dealings and fun stuff. Please contact us.
View all posts by News Staff →
Of love and money
State Dedicates Millions to Transit