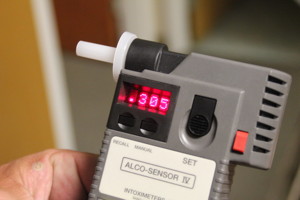 (Press Release) On Sunday, March 16, 2014, at approximately 8:25 P.M., a California Highway Patrol (CHP) Bridgeport Area officer made a traffic stop on a black Chevrolet Astro Van for driving over 80 miles per hour on US-395 northbound, just south of Convict Lake Road. The officer contacted two individuals in the vehicle and advised the driver of the reason for the stop. The officer immediately recognized the odor of an alcoholic beverage emitting from within the vehicle and observed an open container of alcohol at the passenger’s feet.

The officer requested the driver (Ethan Gilbert of Newhall, California) perform field sobriety tests. The officer determined Gilbert was under the influence of alcohol, with a preliminary alcohol screening test of 0.27%, more than three times the 0.08% legal limit. Gilbert was arrested for driving under the influence and booked into the Mono County Jail in Bridgeport. Gilbert’s van was towed and he was issued a driver license suspension. Mammoth Lakes Police Department assisted the CHP officer at the scene of the arrest. Gilbert’s passenger was provided a ride into Mammoth Lakes by the California Highway Patrol.

We work to provide daily news to all of the Eastern Sierra, in the tradition of Eastern Sierra News Service and the Sierra Wave. We bring you daily happenings, local politics, crime, government dealings and fun stuff. Please contact us.
View all posts by News Staff →
Re-greening leads to dust and wind damage
Boulaalam case dismissed
2 Comments
Newest
Oldest Most Voted
Inline Feedbacks
View all comments

After hearing so much bad about the sheriffs department, at least there are still some good news for the CHP and MLPD. Thank you for stopping this time bomb before he killed someone. Driving at that high rate of speed and being that drunk is just terrifying. Thank you for… Read more »

Good for our CHP and MLPD. Don’t need these DWI guys on the road.