By News Staff on October 31, 2011 in Government Agencies/Utilities 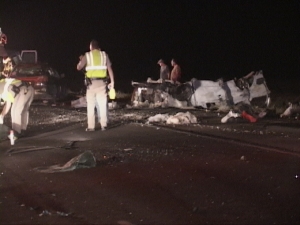 SUV wreckage lies in the foreground with the damaged van further north.

A recently released California Highway Patrol Report on a fiery crash south of Bishop last August says that the 17-year-old driver of an SUV, driving a minimum of 85 miles per hour, was unable to slow down when she rapidly approached two big rigs in both southbound lanes.  Her evasive moves after that led to an explosive crash that involved two other vehicles in northbound 395 and left three dead. The CHP says they believe the young driver was distracted, but they will never know by what.

Sierra Wave had reported the details of this CHP Multidisciplinary Accident Investigation Teams (MAIT) report last week, based on an article in the Los Angeles Times.  We have since spoken to Bishop CHP Public Information Officer Dennis Cleland.  He verified that Natalie Nield, 17, came up fast on two southbound big rigs in both lanes the night of August 9, 2010.  With her minimum speed at a calculated 85 mph, Cleland said, “She came on them quick, was distracted by something we will never know and went off to the right shoulder.”

Cleland said that Nield tried to get back on the roadway, overcorrected and went into a lateral slide across the southbound lanes, over the center divider and into the northbound lanes.  Cleland said Nield started to roll over during that sequence.  “Her vehicle caught on fire,” he said, “and landed on its right side.”  The SUV collided with a van driven by California Baptist University cheer-leading coach, Wendy Rice, 35, of Corona.  The van carried a dozen cross-country team students headed for high altitude training in Mammoth.  The students and coach in Nield’s car were headed home from high altitude track training in Mammoth Lakes.

Cleland said that the collision compromised the fuel tank and Nield’s vehicle exploded into flames and shot the van around in a clockwise motion.  At that point, a young woman driving a Subaru ran into the front of the van.

The accident killed Wendy Rice in the van and two people in the SUV – Nield and Amanda Post, 18. Track trainer, John Adams, 39, died later in the ICU at Renown Medical Center in Reno.  Adams was a close friend of Mammoth Lakes Recreation Director, Stuart Brown. Many others in this tragic accident were seriously injured.

19-year-old Derek Thomas, also in the SUV, suffered third degree burns over 85% of his body and was only recently released from a southland hospital. Drew Dellis, 22, also suffered serious injuries. The teens and coach in the SUV were from the Carlsbad area.

Officer Cleland said that he hopes all will learn from this accident.  He said while it’s unclear what caused Nield’s inattention or distraction, anything is possible.  “Even talking to a passenger can cause a problem,” said Cleland.  “We all need to learn to drive within our abilities,” he said.  Cleland is personally involved in this effort to train young drivers.  Through the CHP, he is conducting StartSmart programs at local high schools.

your speculations incorrectly fill in the gaps. they are square pegs to the story’s round holes.

Please show some respect for all these families.

sierragrl…..I don’t think this is a “get over it” kind of situation. The point being made is not that the girl was hanging out with friends and had this accident but that she was in a school field trip and caused this accident. If it wasn’t a “school sanctioned trip”… Read more »

justin, I was not suggesting that people should just get ove a horrific accident…who could do so? I was saying quit harping on the fact a 17 yo was driving. the only logic infered by harping on her age is that 17 yo people should not drive down that road,… Read more »

@ Sierragrl Why would her coach drive her parents car? So the most experienced driver was behind the wheel to insure everyone returned home safely. I would have no problem handing my car keys to an adult coach before I let my 17 year old drive a car load of… Read more »

Also in Sierragrl”s post says Caltrans will be the one getting sued if there is a lawsuit…..Doubt that will happen…If anyone gets hit with a lawsuit,it will be either the insurance company of the SUV that caused the accident,and/or,if that SUV’s owner was indeed the property of the Carlsbads school’s… Read more »

Also in Sierragrl”s post says Caltrans will be the one getting sued if there is a lawsuit…..Doubt that will happen… Bet that will happen, it happens all the time. The state has deep pockets and attorneys know this. The state is usually either the first considered, or one of the… Read more »

Unfortunately, the attorney’s will look for the deep pockets, which is Caltrans. All they have to do is find any one thing that was exactly kosher as far as the highway goes, and they will get millions. I don’t like it, but that’s how things work. As far as a… Read more »

No way in HELL should there have been a 17 yr. old at the wheel, entrusted with the lives of everyone in that van, PERIOD!

The 17 year old was driving the Ford Explorer not the van with all the passengers..

The Ford Explorer carried at least 3 people…..INCLUDING an adult.

And the explorer had no survivors…

Derek Thomas would protest to that.

Maggie’s Mommy…..Not the kind of story,or article I am going to get into a “hot debate”with,but from what I have heard,not all the passengers were wearing seatbelts…As far as what you said about even experienced drivers being distracted and causing,or unable to avoid a traffic collision because of a distraction,this… Read more »

Maybe I’m missing something, but I don’t see in the article (or any of the previous articles) where it states that they were not wearing seatbelts. I agree that lack of experience is one of the main causes of many traffic accidents. However, even the most experienced driver can be… Read more »

Kind of a touchy one here,with multiple victims in different vehicles,and with a growing dis-taste by many for frivolous lawsuits brought on by so many now-days,I think this one might warrent such action.The southbound van driven by the 17 year old student,with at least one grown adult coach as a… Read more »