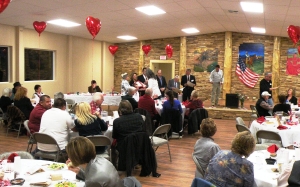 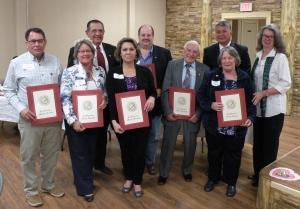 Newly-elected County Supervisor Matt Kingsley installed the new officers. County Administrator Kevin Carunchio was awarded a very large, impressive trophy which came originally a Fourth of July Parade trophy from the Independence in recognition of his support of the community of Lone Pine. When asked where he would keep the trophy, he said he was hoping someone in Independence “might want it back”. Kathy and Rich were award exhibition ribbons from the State Fair in recognition of the “exhibitionism”.

Margaret and Don Warner were awarded the “Volunteers of the Year” for their service to the chamber. Special recognition was given to Yolanda Chavez, the manager of the Dow Villa for her 30 years of service by Jeanne Willey and Lynne Bunn. Chavez started out as housekeeper on February 12, 1983.

Member Dave Haas was thanked for the use of the new building, which has opened to rave reviews from the community. Lynne Bunn and Jeannie Willey of the Dow Villa Motel were recognized for their contribution in providing the no host bar with all the proceeds going to the chamber.

The dinner and hors’ d’oeuvres were provided by Boulder Creek. And a special “shout-out” was given to volunteer cook Dick Gering, who was ably assisted by hostesses Alina Berry and Nan Gering.

We work to provide daily news to all of the Eastern Sierra, in the tradition of Eastern Sierra News Service and the Sierra Wave. We bring you daily happenings, local politics, crime, government dealings and fun stuff. Please contact us.
View all posts by News Staff →
Inyo-Mono community gets behind Buckley Pond project
Mono SAR awards