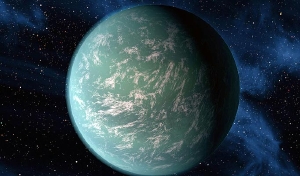 NASA recently announced the discovery of a new planet, 600 light years away, that could support life as we know it.  NASA calls the new planet Kepler 22-b and says that it marks the best candidate yet for a life-bearing world beyond our solar system.  Locally, the radio observatory east of Big Pine would study  the new planet if they receive a proposal from an astronomer.

Nikolas Volgenau is Assistant Director of Operations at the Combined Array for Research in Millimeter-wave Astronomy,

better known as CARMA.  CARMA includes some 15 radio telescopes that sit in Cedar Flat off Westgard Pass.  The telescopes receive radiation waves from space.  This project is associated with CalTech Observatory just north of Big Pine.  Other universities are also involved in CARMA.

When asked if CARMA might ever point a radio telescope at Kepler 22-b to detect radiation waves, Volgenau said if a scientific proposal were approved to do so, they would.  “It’s certainly a possibility,” said Volgenau.  “We rely on proposals from astronomers.”  He explained that CARMA has a proposal cycle every 6 months although timely and urgent projects would take precedence.

Right now, CARMA uses its telescopes to study things like black holes, star and planet formation and evolution of distant galaxies.  NASA has described the newly discovered planet, Kepler 22-b, as not too hot and not too cold but just right for life.  The planet also orbits a star very similar to our sun.  There are still many unknowns about the planet.  Scientists want to know if it has an atmosphere and a surface.  They do know that the planet’s year has 290 days, very similar to our year.  It is more than two times bigger than earth, and it could be entirely covered with water, which would not rule out life forms.