Bishop – The California Department of Transportation (Caltrans) will hold its annual Workers Memorial Ceremony on Tuesday, April 16th at 11:30 a.m. at the Caltrans District 9 Bishop Maintenance Station located at 1250 Spruce Street (behind Kmart) in Bishop, CA.  This ceremony will be held in coordination with Caltrans Safety Awareness Week.  The event is open to the public, and Caltrans would like to encourage everyone to attend. 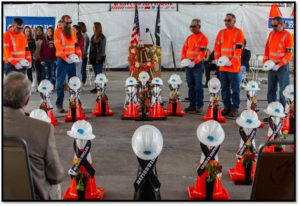 Caltrans District 9 Workers Memorial 2018.  Bridgeport Maintenance Crew stand in rememberance of their fellow workers who died in the line of duty.

The Caltrans Workers Memorial is a time to remember employees who have lost their lives building, maintaining, and operating California’s world-class transportation system.  Since 1921, a total of 189 Caltrans workers have died in the line of duty.  This year we will be paying special tribute to William “Cas” Casdorph, who suffered fatal injuries after falling 60 feet off a transition ramp while working along State Route 163 in San Diego.

“Thousands of people report for work every day braving the hazards involved in working on busy highways, roadways and bridges across California,” said Caltrans District 9 Director Brent Green. “This memorial is a solemn reminder to us all that we each must do our part to keep California’s roadways safe for everyone.”

The ceremony will feature a temporary memorial of 20 orange safety cones in the shape of a caution sign: 7 to honor each of District 9’s employees that have lost their lives while on duty, 12 representing Caltrans districts around the state, one to honor Cas who lost his life this past year, and one black cone representing workers nationwide. 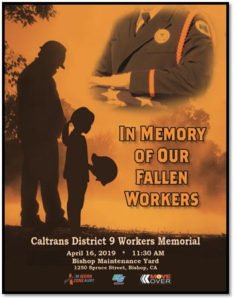 The Mojave Maintenance Crew has the honor of conducting the Presentation of Remembrance as the Caltrans District 9 Color Guard. They will place flowers at the base of each cone to honor the fallen employees who have made the ultimate sacrifice.

Highway construction and maintenance work is one of the most dangerous occupations in the United States. In addition to the danger workers face, an estimated 85 to 90 percent of people who are killed in highway work zones are drivers and passengers. Most of these fatalities are caused by rear-end collisions, with speeding, distracted and aggressive driving the most common causes.

Caltrans and highway workers take continuous measures to ensure safety, such as participating in training, updating equipment and alerting motorists in advance of highway work zones. For example, Caltrans has taken steps to further improve the visibility of employees and trucks by increasing the reflectivity of worker clothing and striping on the trucks.

But drivers can dramatically improve safety in work zones by slowing down, eliminating distractions such as talking on the phone or texting and dedicating all attention to the roadway. Motorists are also required by state law to move over a lane when safe to do so when approaching a highway worker’s vehicle or other emergency response vehicles with flashing amber lights.

Caltrans has launched the “Be Work Zone Alert” campaign. The campaign uses the children of actual Caltrans workers as spokespeople, underscoring the real human tragedy that happens when a highway worker is injured or killed. In addition to statewide billboards, the campaign also launched the “Be Work Zone Alert” television spot to educate and encourage drivers to Slow for the Cone Zone and move over for emergency vehicles. The spot can be viewed athttps://youtu.be/qN24M5lGNmE

Caltrans has partnered with the California Transportation Foundation to develop two funds to benefit the families of Caltrans workers killed on the job. The Fallen Workers Assistance and Memorial Fund helps with the initial needs a surviving family faces and the Caltrans Fallen Workers Memorial Scholarship is available to the children of these workers. For more information or to make donations, visit www.transportationfoundation.org.