By News Staff on July 18, 2018 in Government Agencies/Utilities

In the next six to eight weeks, Spectrum, the contractor on Cal Trans’ downtown Bishop project will have completed the Line Street portion. Work on Main Street will be postponed. 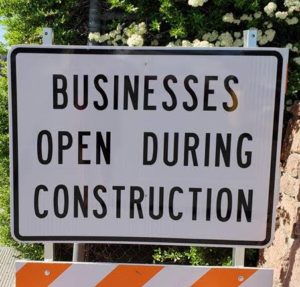 Initially, the project was to bring curbs, sidewalks and driveways into compliance with the Americans with Disabilities Act, stretching from west of the Bishop Care Center on Line Street to Main and from Jay Street north to the Wye.

According to Florene Trainor, Cal Trans’ District 9 public information officer, the department opted for a more complete, fully integrated project with bike and pedestrian features in addition to bringing the downtown area into ADA compliance. “Best to do the project just once,” she said.

Some of the older buildings in the downtown core sit at a different level than newer construction. A real fix would require tearing the sidewalks down to the dirt.

The timing on the final project isn’t set in concrete yet. Probably in the next two to three years. The exact start date depends on the vote to repeal California’s gas tax, on this November’s ballot. “The project may not be as extensive,” Trainor said, “or it may be pushed out further than we would like, but it will still happen.”