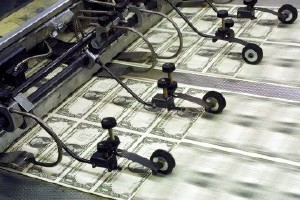 As members of the virtually unknown in the world, the Bureaucrat Beat Newsroom staff has breathed a big sigh of relief that Kanye West will never comment on what we have said about him or him about us. Whew!!

How about what Ronald Reagan’s former budget manager said on CNN Sunday. Wow. David Stockman, a Republican, minces no words when he speaks strongly in favor of taxes on the wealthy and major spending cuts in government and in personal lives. Stockman appeared for an interview with CNN’s Fareed Zakaria. Stockman said we now suffer from a 30-year spending spree by government and individuals. This budget expert sees several years of a down economy as the “new normal”. He said it may take ten years of very little growth and a lot of struggle to pull out of what we have fallen into.

Stockman calls the government and federal reserve estimates of growth in the economy and jobs as delusional. He believes that a realistic level of unemployment, associated costs and drops in revenue will mean an ongoing federal budget deficit of $100 billion per month with economic growth at $50 billion. Yep – in the hole.

Stockman points to the current “printing press money” with nothing to back it up and says it could end in a traumatic sell-off of U.S. bonds and a financial tailspin. Not a happy message, but definitely worth your investigation. Google David Stockman for a big eye-opener.

What about the message of Texas Republican Congressman Joe Barton. He now fights against the 2007 Energy Independence and Security Act. Barton wants to save the incandescent light bulb which the Act outlaws by 2014. One of our listeners agrees, particularly considering that a replacement bulb known as CFL contains mercury. When it breaks, people have to clear rooms to avoid the toxicity, some say. Barton and those who agree with him point to lost jobs when incandescent bulb factories close down and more expensive bulbs that the poor may not easily afford.

Okay. The Congressman may have some points, but what has he done lately to help with the oil dependency situation? He’s from Texas so perhaps he gets cash from the oil business. Something to ponder.

Ponder this. The major television networks and most newspapers refuse to discuss the fact that our representatives in 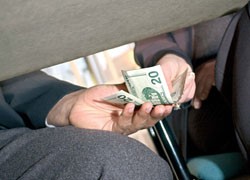 Washington and Sacramento function within a system of legalized bribery. Special interests give them campaign funds and they vote accordingly. Many of them deny that connection, but it’s not hard to connect the dots.

On the local scene, issues of open government continue to pop up. When seats open up on boards and commissions, the general public wants to know just in case they might like to take part in their government and local institutions.

We and some others were surprised to learn that another seat on the Inyo Water Commission would be open for appointment. Teri Cawelti’s seat expires. That’s when we inadvertently learned that the policy of the Inyo Supervisors only requires publication of a legal ad in the local paper to notify the public of an open commission seat – any commission. No press releases to the media in general. Not everyone reads the legals regularly. Then, we learned the same day that a seat on the Mammoth Hospital board has opened up. We had received no notice of that, and we’re not sure about the hospital board policy. We would suggest that over time we have come to learn that the public prefers full disclosure of everything possible and complete opportunity to become part of local governing bodies.

Bottom line – the public, which amounts to the boss of all elected boards and appointed commissions, wants to know a vacancy exists that they might fill. Government is not a private club.

We will just note that the Town of Mammoth always does the full disclosure thing when it comes to board and commission vacancies. The press releases go out like clockwork when it’s time to fill a spot. You may not like their politics, but the Mammoth Town Council does seem to respect public participation.

We work to provide daily news to all of the Eastern Sierra, in the tradition of Eastern Sierra News Service and the Sierra Wave. We bring you daily happenings, local politics, crime, government dealings and fun stuff. Please contact us.
View all posts by News Staff →
Deadline to File for Mammoth Hospital Board Appointment
Eastside This Week: Christmas Happenings and Films