The community, co-workers and students—both current and former—of Big Pine schools will head to the campus’ Helen Lund Square today after the last bell to recognize Bob Church’s 33 years of service and eat potluck desserts. 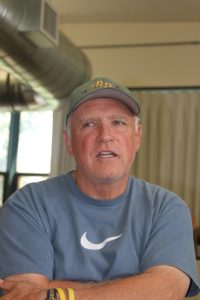 Church will be retiring as teacher, athletic director, girls’ softball coach and girls’ basketball assistant coach, as well as a constant presence at the whole gamut of Big Pine athletic events.

“I wouldn’t change a thing,” he said of his long tenure in Big Pine. “I never wanted to be anywhere else.”

So, what will Church’s retirement look like? Pretty much what the last 33 years looked like, just a little less structured.

His “retirement” plans include substitute teaching, maybe a walk-on coach position here and there, a trip to the Football Hall of Fame in Canton, Ohio and the baseball equivalent in Cooperstown, New York with his brother and rounding out the list of Major League Baseball fields he has yet to visit. Yep, Church is a sports guy.

Church started as a Special Education teacher in 1983 and taught in both the middle and high schools.

The coaching started with flag football. He scouted during the Warriors run to the CIF Division Football semifinals and JV boys’ basketball, came on as assistant football coach in 1984, the year Big Pine made it to the CIF semifinals.

He coached volleyball, boys’ basketball and settled in as head coach of the Lady Warriors’ softball team for the last 27 or 28 years. He and Dave Mettam have swapped girls’ basketball coaching and assistant coaching duties for years. The 2015-16 team went undefeated in league.

He remembers the big games over the last 33 years, and probably all the games, if time allowed.

The standout was the year the Warriors basketball team went 19-1, losing to the Oakwood Gorillas in the CIF finals. “Mitch Butler was a Gorilla,” he said as a way to explain why the Warriors settled for second place. “He was a starter at UCLA and played in the NBA for seven or eight years.”

Church even remembers the local newspaper’s headline: “The Butler did it.”

“We had some standout athletes that year,” Church said. Some of those standouts are Big Pine coaches whose kids have also been coached by Church and he figures he’ll be around to watch their grandkids suit up as Warriors and Lady Warriors.

He still gets together with members of the ’87 team a couple times a year. They watch basketball games.

Church has seen some changes over the last 33 years. When he started, the high school had an enrollment of 100; now it’s closer to 30, making it tough to field teams.

But one thing that hasn’t changed is the Big Pine Warrior pride. Recent teams have gone from Hi-Lo League champions to seasons in the league basement, but the tenacity is always there.

Church may live in Bishop—he said he realized if he lived in Big Pine, he’d probably have spent every waking hour either teaching, coaching or shooting hoops with his students—but he’s a Piner in every sense of the word.

Congratulations Bob on a successful career!
Best Wishes in your retirement 🙂
Yea Class of ’72!
~Maureen O’Connor

Bob you will be missed. I really wish my kids could’ve had you as a teacher and a coach.

It was always amazing to me ,that a school with so few students ,could put together such quality teams .