At approximately 1:00am this morning Inyo County Sheriff’s Office received a report that Darrell Maddox Jr, a 20-year old man from Bishop, was intoxicated and behaving erratically. 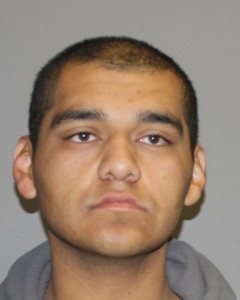 When Inyo County Sheriff’s Deputies responded to the location where Maddox was reported to be, Maddox attempted to flee on foot. Deputies were able to detain Maddox; however Maddox was uncooperative, refused a field sobriety test, and was ultimately taken into custody for resisting/obstructing.

While en route to the Inyo County Jail, Maddox began kicking the patrol vehicle ultimately damaging the inside of the door. Maddox was booked for obstruction, and vandalism. This morning after being detained in a sobering cell, Maddox was released with a notice to appear.

Today shortly after 10:00am the Inyo County Sheriff’s Office received notification that Maddox had assaulted an elderly man outside of Carroll’s Market in Big Pine. The victim reportedly picked Maddox up as a hitchhiker directly north of Independence. Maddox asked to be dropped off in Big Pine; once the vehicle stopped the victim reported that Maddox punched him in the face then stole his wallet and phone.

Two California Highway Patrol officers located Maddox on the east side of Big Pine. Maddox got into a physical altercation with the officers, striking one of the CHP officers, which prompted the deployment of a Taser.

CHP arrested Maddox, but then transferred custody to Inyo County Sheriff’s Office for booking. Maddox was booked into the Inyo County Jail under the following charges: felony robbery, felony cruelty to an elder, obstruction, resisting arrest, and battery on Peace Officer. Bail has been set at $100,000.

And how many times has he been in and out of “camp snoopy ” I also wonder if he has had any incidents. . (Fighting) while locked up , as with the many regular visitors that …..time&time again. . Are released. ..only to be arrested. .just hours later….it’s just like… Read more »

Sadly,on the Inyo County Sheriff facebook website,the man that was assaulted by this “mis-guided child” wrote a comment about this incident….he is a disabled Vietnam Veteran…and was on his way to Oregon for a hiking trip with his daughter….instead,he got to spend time at the VA Hospital in La Jolla… Read more »

yet you don’t agree with me that he shouldn’t have been released that morning, I bet this gentleman does.

Sugar Magnolia……Of course he shouldn’t have been released that morning…for public-safety’s sake,bail should have been set high….not OR and a “notice to appear”…but from what your saying,you said “he was just a drunk guy….get him home and calmed down, thus giving him the best chance to succeed “…like it was… Read more »

Growing up in so cal I’ve had one or two long walks home to think about my behavior, as Wondering stated. I guess that was enough for me, the way some people would look at me, throw things and yell at me. I never felt like so much of a… Read more »

I’ll base my opinion on my 30 years law enforcement experience,,,, this young man is a A-Hole and most likely will always be one…

Roy, that sounds like something or last DA would say.

Low Inyo, I don’t really disagree with your opinion on this kid needing help. But our government sponsored rehab is a sad joke in this country as far as I’m concerned. I wish people would look at what all these expensive rehabs really do. Their success rate is less then… Read more »

Agreed,Trouble….re-hab rarely works if and when it’s forced on someone through probation or “community service”…I actually knew someone in Oregon that was a current drug-addict and part of his “community service” was counceling drug addicts at a re-hab….telling them of the draw-backs of drug addiction….only way to quit the drug… Read more »

The more I learn about this one, the less sense it makes….First, he was just a drunk guy, he wasn’t driving or anything. You’d think our LEO could handle a drunk guy and get him to go home or at least calm down. But, sinse that didn’t happen and he… Read more »

sugarmagnolia….Sounds like a lot of “who shot John” to me….and excuses being made for his behavior….almost to the point the assaults were the fault of Law Enforcement.LE isn’t a taxi service to law-breakers…and they’re not a baby-sitting service that should calm drunk people down and then take them home after… Read more »

I don’t know what ‘who shot john’ refers to, but I’m not making excuses for this guy. He’s gonna have to pay for his own actions. i just believe in giving people the best chance to succeed…ie. don’t leave them in a town 40 miles from home with no way… Read more »

Sugar Magnolia,
How in the world do you know he wasn’t sober when he was released? Do you really think he was released while still drunk? I think Inyo County knows better than to release someone while intoxicated. Looks to me like you’re making an excuse for this individuals action.

I heard a ex con once say the best drugs he ever got was in jail. Just saying 🙂

Sugar Magnolia….Maybe it’s just me thinking this way,but “The best chance to succeed” doesn’t include getting drunk ,resisting arrest….kicking patrol cars…and then when you get released from jail,assault the guy that was nice enough to give you a ride home and steal his wallet and cell phone,followed by getting into… Read more »

@sugarmagnolia I had a family member who was always in trouble….and would call for a ride when he would get released from ICJ. Ummmm walk your happy ass home buddy, tough love. It did’t kill him, he had a few “long walks” home to think about his behavior. And BTW… Read more »

…and Rick O’brien,having just gotten out of the drunk tank a few hours earlier for his assault # 1 on the Inyo County Sheriffs officers,this ADULT (not kid) WAS sober at the time he launched his assault # 2 and stole the wallet and cell phone from the elderly man… Read more »

What started out as a nothing misdemeanor , evolves into a major group of felony charges, ALL because of alcohol, and the dumb kid can’t even legally drink yet ! Unless this kid gets some serious help, like right now, he’s well on his way to being a lifetime problem… Read more »

What alcohol??? The dirt bag just got released from ICJ custody. He was stone cold sober when he did this to that poor old man!!!

I wish bad things for this rotten human being.

…As I read this story here,stating Maddox was “intoxicated and behaving erratically”,and then fleeing when officers arrived….captured….arrested,then kicking the patrol car,charged with obstruction and vandalism…and then released with a “notice to appear”…..as I read on,with his 10 A.M. shinanigans began again,assaulting an elderly man that picked him up hitch-hiking and… Read more »

Send this guy to prison. We don’t need his type around here! No excuse for this behavior!