A spy satellite gone awry. The same night of the big lunar eclipse, the American military angled to shoot down an out of control satellite that was hurtling towards Earth, carrying more than 500 kilograms of toxic fuel and secret information.

Sources described the operation as a bullet hitting a bullet. Turns out a local navy man had a hand in calculating just how and where to shoot the missle to take down the satellite. 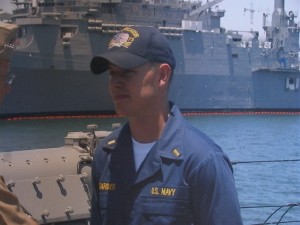 Navy Ensign David Gardner, son of Ted and Pat Gardner of Bishop, is stationed aboard the USS Decatur as the Main Propulsion Division Officer. The crew of the Decatur helped with what they call trajectory information – details of how and where to shoot down that dangerous satellite.

Sources said that the 5,000 pound spy satellite went dysfunctional soon after its 2006 launch and has been orbiting out of control ever since. Early this morning, the missle launched reportedly shattered the satellite with pieces expected to burn up as they fall into the atmosphere.

The USS Lake Erie was chosen to shoot the satellite down. The Erie was accompanied by the USS Decatur and the USS Russell. The Navy did this work somewhere in the Pacific Ocean north of the equator. The Decatur, where Ensign Gardner is stationed, fed trajectory information to the Erie and the Russell backed up the Decatur.

By the way, this was no inexpensive mission. The cost to shoot down the satellite? Between $40 million and $60 million, according to the Pentagon. The fears about letting the satellite fall to the earth – toxic fuel aboard, as well as classified information.

We work to provide daily news to all of the Eastern Sierra, in the tradition of Eastern Sierra News Service and the Sierra Wave. We bring you daily happenings, local politics, crime, government dealings and fun stuff. Please contact us.
View all posts by News Staff →
Marijuana Bust in Chalfant
Mammoth Air Quality Needs Attention