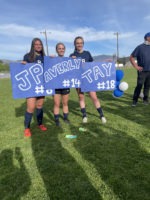 Bishop’s Lady Broncos varsity soccer team hosted the Mammoth Huskies on April 30, 2021.  The temperature was approximately 93° and made for harsh playing conditions. Especially for the Broncos who had a short bench. Lady Broncos pulled off a 3-1 win bring their record to 4 wins and 1 loss.

The Broncos came out striking hard when JuliAnna Jackson was able put the ball in the back of the net from a pass from Jordan Prichard  in the first five minutes of play. Jaden Davis scored late in the first half bring the half time score to 2-0.

Halfway through  the second half the Huskies scored from a perfectly placed midfield shot over the head of the Broncos’ goalkeeper, Annabell Mojica.

Late in the second half Jaden Davis would pick up her second goal from a pass from Jordan Prichard.

The Broncos will travel to Rosamond next Friday for the regular season’s final game.