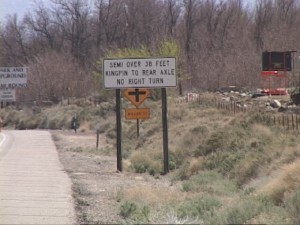 The tribe had moved ahead with a gas station and minimart on the west side of Highway 395 north of Independence. Reports indicated a truck stop would go into the same location. A casino building is apparently there too. Caltrans Director Tom Hallenbeck says that the entrance to all of this seems flawed when it comes to big trucks safely entering and exiting. He said Caltrans has tried to talk to the tribe, but tribal officials have so far refused.

"It's an unsafe situation," said Hallenbeck. As a result, Caltrans has erected signs to warn big rigs that they can not safely turn into the new gas station and casino area.

We have tried repeatedly to reach tribal officials, but the phone line remains busy.

We work to provide daily news to all of the Eastern Sierra, in the tradition of Eastern Sierra News Service and the Sierra Wave. We bring you daily happenings, local politics, crime, government dealings and fun stuff. Please contact us.
View all posts by News Staff →
Public Works Director To Leave
Election Brings Out Mysterious Mammoth Phone Survey