Following a request by the Mono Supervisors, Bob Williams of USFWS appeared at Tuesday’s regular meeting to publicly answer questions regarding the proposal to designate 417,000 acres as Critical Habitat for the Sierra Nevada Bighorn Sheep.

Not only was Williams subject to questions from the Board, but also from Nevada sheep rancher Fred Fulstone and others in attendance. Unlike the USFWS-organized meetings in Bridgeport and Bishop last month, this appearance allowed the public the much desired opportunity to address Williams directly, and receive a public response to their questions.

Scientific issues such as disease transmission between domestic and wild sheep and the taxonomy of the species were revisited, as well as the potential impacts Critical Habitat might have on recreation.

Following William’s time at the podium, 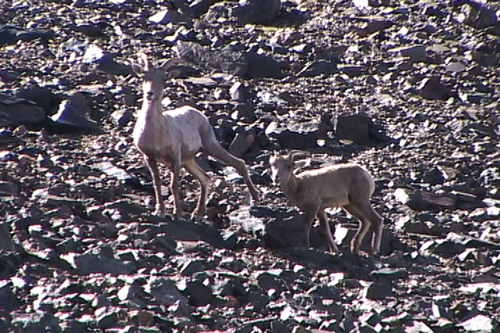 the Mono Supervisors considered a resolution siding distinctly with the county’s economic interests. The resolution suggests the USFWS remove nearly 2/3 of the proposed Habitat within Mono County. A vote on the resolution is scheduled for next Tuesday’s meeting.

Williams assured the Supes that comments from local governments will be “fully considered” as the USFWS moves forward with the proposal. The Economic Analysis that accompanies the proposal is due out early next year, at which time another public comment period will commence before the final rule.

We work to provide daily news to all of the Eastern Sierra, in the tradition of Eastern Sierra News Service and the Sierra Wave. We bring you daily happenings, local politics, crime, government dealings and fun stuff. Please contact us.
View all posts by News Staff →
Ski Back Trail Field Trip on Saturday
Ski Area Reassessment Still Undone