By News Staff on August 29, 2014 in Government Agencies/Utilities 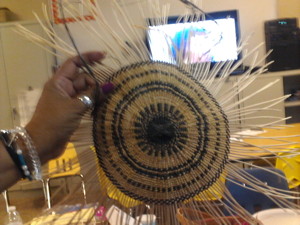 The public is invited to watch members of the Big Pine Paiute Tribe’s Indian Education Center’s Basket Weaving Class practice their skills at the Eastern California Museum on Saturday August 30 from 11 a.m. to 3 p.m. Many of the class members are learning basket weaving techniques and skills in order to revive the tribe’s rich tradition of basket weaving so it can be passed down to future generations.

The basket weaving class is part of the tribe’s cultural enrichment program. In Paiute, the group is called, “Tovowahamatu Tei Tugwishta,” which translates into, “Those of Big Pine Our Weavers of Baskets.”

The group started meeting in April and began exploring their basket-making tradition by making basket hats, and will also be making winnowing baskets and burden baskets.

While most of the weavers are just learning the art and craft of basketry, some of the teachers have more than 30 years of weaving experience, and an elder weaver is offering 50 years of experience making and weaving baskets.

Jessica Bacoch noted that two and three generations of weavers are in the group. Although many families have a history of basket making, for several generations those skills and talents were not passed down to the next generation. “We have committed and pledged to ourselves to learn, teach and pass on the art and skills of basket weaving so that it will not die out. We are keeping our Paiute traditions alive, as a reminder that, ‘we are still here.’”

The group will also draw inspiration from the Eastern California Museum’s impressive exhibit of more than 400 Owens Valley Paiute and Panamint Shoshone (Death Valley) baskets. The decorative baskets are examples of the acclaimed artistic talents and skill of local Paiute weavers working in the first half of the 20th Century. The exhibit is one of the largest displays of the intricate and delicate baskets in the region.

We work to provide daily news to all of the Eastern Sierra, in the tradition of Eastern Sierra News Service and the Sierra Wave. We bring you daily happenings, local politics, crime, government dealings and fun stuff. Please contact us.
View all posts by News Staff →
Mammoth recreation news
Inyo SAR helps two hikers